Daniel Berger, Viktor Hovland and Joel Dahmen argue over the position of a drop on the 16th at The Players Championship. 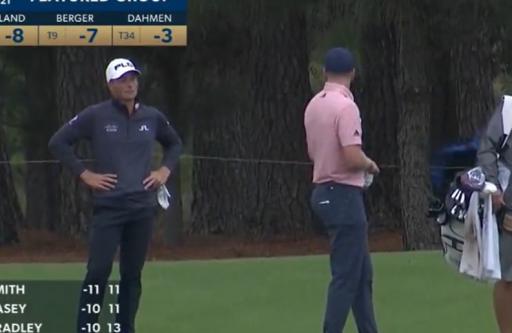 Daniel Berger, Viktor Hovland and Joel Dahmen were involved in a heated altercation on the par-5 16th in the final round of The Players Championship at TPC Sawgrass.

Berger sent his second shot into the water right of the green and then had to take a drop at the point his ball crossed the hazard.

Related: Viktor Hovland on Daniel Berger fiasco: "We've got to protect the field"

The American believed his ball had crossed the water further up the hole, but his playing partner Hovland was not so certain and wanted him to drop further back at the front of the hazard.

Third member of the group, Joel Dahmen, was siding with Hovland's assessment of the drop.

Daniel Berger to Viktor Hovland: “I’ve never taken a bad drop in my life and I’m not about to take a bad one here.” pic.twitter.com/RXqIOtl4Mu

"It's way too far back," Berger can be heard saying as the rules official comes over to discuss the drop.

"To be honest with you, I'm not really okay with it being up there," replied Hovland during the conversation, referring to the initial position that Berger wanted.

"I’ve never taken a bad drop in my life and I’m not about to take a bad one here," says Berger.

Dahmen, siding with Hovland, can be heard giving his opinion in the background.

"I'm gonna drop here for the sake of you guys, but you're wrong," says Berger, who then exchanges words with the rules official.

Daniel Berger, Viktor Hovland, and Joel Dahmen get into it on 16 after Berger wanted to drop much closer to the green after finding the drink.

Berger: “I’m gonna drop here for the sake of you guys, but you’re wrong.” pic.twitter.com/BGdcxqdM28

Obviously really hard to tell from any camera angle, but here's Berger's shot.

Certainly looks like, at minimum, Berger has a decent case here? pic.twitter.com/yhPqm98Dle

Berger dropped further back, through gritted teeth, and sent a wedge into the heart of the green.

He two-putted for a bogey-six en route to a round of 70 as he finished the week on 6-under par.

Hovland ended up one better with a round of 69 and 7-under par total.

Both players had got to within two shots of the lead at one point on the back nine but they would both stumble home to lose pace with the leaders.

Dahmen signed for a 73 and 3-under par total.

Berger and Dahmen both declined comment with the media after the round.

Hovland said: "It’s not a fun conversation but when you strongly believe in something you kind of have to stand your ground."

Daniel Berger and Joel Dahmen both declined to speak to the media after the round about Drop Gate at the Players.

Next Page: Jon Rahm makes a shocking QUINTUPLE BOGEY NINE at The Players - his worst ever one-hole score on the PGA Tour