Daniel Berger arrived in Hawaii on Sunday, but he didn't have his clubs until Tuesday. Enter Brett Waldman, the caddie who came to the rescue. 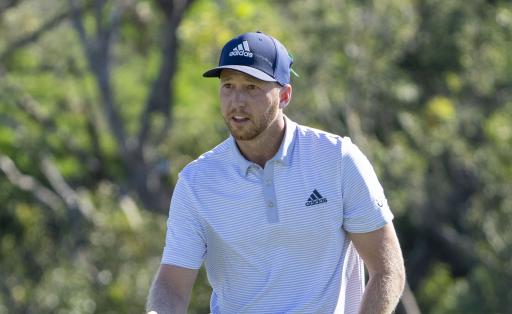 Viktor Hovland was not the only player in Hawaii this week to suffer from logistical golf club issues. Daniel Berger didn't share the same woe as the Norwegian, but it wasn't ideal.

Berger was last seen on the PGA Tour at the Hero World Challenge hosted by Tiger Woods. He arrived at Kapalua Resort last Sunday to prepare for his week at the Sentry Tournament of Champions.

After calling American Airlines multiple times, Berger's clubs did not arrive until Tuesday, so his two days waiting for them could have been a disaster.

But luckily, it wasn't a disaster. Brett Waldman, an experienced PGA Tour caddie, loaned Berger his clubs for these two days.

To make his practice as worthwhile as possible, he made some adjustments to Waldman's clubs. But only a few.

"Borrowed one of the other caddie's (clubs), Brett Waldman was here. So used his clubs and changed all the lies and lofts, so I got to hit balls on Monday, which was nice," Berger said.

"Especially after a long flight of coming across the world to get here, I just had to get the body moving, so whatever I had was going to work."

It seems Berger was grateful for the help that Waldman offered him, but the PGA Tour caddie will have to adjust the clubs back to his own specs in his own time by the looks of it.

The practice clearly helped the World No. 19. He has fired two solid rounds of 66 to finish on 14-under-par in tied second place with Jon Rahm, three shots behind Cameron Smith.

Berger is a four-time winner on the PGA Tour and it would be arguably his most unexpected win of all if he was victorious on Sunday afternoon at the Plantation Course.

US PGA
"Everyone deserves a second chance": What is Bryson DeChambeau talking about?
US PGA
Bryson DeChambeau's broken wrist "held up nicely" on practice day at US PGA
Equipment
The TOP 5 FootJoy golf shoes ahead of the PGA Championship!
PGA Tour
Scottie Scheffler reveals the point when he knew he'd won The Masters
Equipment
Do you need a new pair of GOLF SHORTS for your game this summer?