Jon Rahm, Cam Smith and Justin Thomas go low in the third round of the Sentry Tournament of Champions on the PGA Tour. 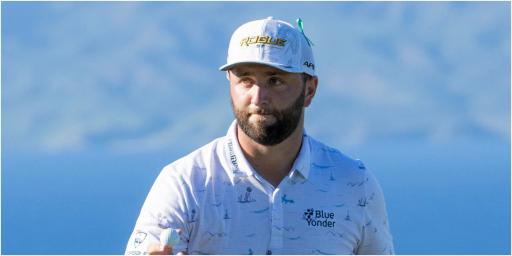 Sensational Jon Rahm "rode the birdie train" to draw level with Australian Cameron Smith heading into the final day of the Sentry Tournament of Champions.

World number one Rahm admitted after his first round that he felt too much was being made of his break from the game as he insisted he only spent three weeks focusing on his family before getting back in the swing of things.

In sizzling Kapalua, Rahm turned it up another level.

He fired a third round 12-under par 61 - the same score Justin Thomas earlier signed for - to draw level with Smith.

"We had a fun battle today and I'm guessing tomorrow's going to be more of the same," Rahm said afterward.

Rahm, 27, added: "You get on that birdie train and things like today can happen."

Aussie Smith, sporting his mullet and mustache look, has been superb so far this week.

"Hopefully we an do much more of the same tomorrow and we'll see what happens."

There is a three-way tie for fourth place between Matt Jones, Sungae Im and reigning FedEx Cup champion Patrick Cantlay who are at 20-under.

Scoring in Hawaii so far has been obscene.

The scoring average among the 38-player field was 67.711, the lowest in relation to par since the PGA Tour record-keeping began in the 1980s.

Thomas' 61 was a new course record. Then Rham matched it.

JT, with Bones on the bag, fired eight birdies, two eagles and no bogeys in a round that looked remarkably easy.

Reportedly, this the ninth time JT has shot 62 or lower on the PGA Tour.

That being said, it's looking like a two-horse race for this championship.