Danny Willett PUTTS FROM BUNKER during RBC Heritage third round

Danny Willett used a very odd method of getting out of the greenside bunker on the 14th hole at Harbour Town and it didn't go according to plan. 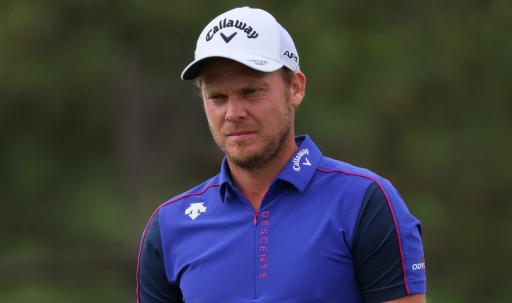 Danny Willett attempted to putt his ball out of a greenside bunker during the third round of the RBC Heritage, but unsurprisingly, it didn't end particularly well.

Willett found the flat waste bunker to the left of the par-3 14th green. This left him a threatening shot from the sand with water on the other side of the green, behind the pin.

Maybe the Englishman was concerned with hitting a wedge and bringing the water into play? He pulled the putter from his bag and took an unorthodox route.

Willett putted his ball but it finished 15 feet short of the hole. This led to Willett's first bogey of the day at Harbour Town and it began a poor run on the back nine.

The former Masters champion was tied third on the 14th hole, but he made more bogeys on the 15th and 17th holes to fall back to 3-under-par for the week.

Willett salvaged a birdie on the 18th hole to card a 4-under-par 67. He is seven shots behind Harold Varner III on 4-under-par with 18 holes left at Hilton Head Island.

This year, the 34-year-old has missed four cuts in 10 appearances on the PGA Tour. His best finish came at Augusta National last week when he was tied 12th.

As for Varner, he shot an incredible round of 63 on Saturday to rise 22 places up the leaderboard. He leads by one shot from Shane Lowry, Erik van Rooyen and Patrick Cantlay.

Tommy Fleetwood also propelled up the leaderboard on day three, carding a 64 to reach 8-under-par and within three shots of Varner.