Jordan Spieth had a moment of madness at RBC Heritage as Harold Varner III has a narrow lead in Harbour Town. 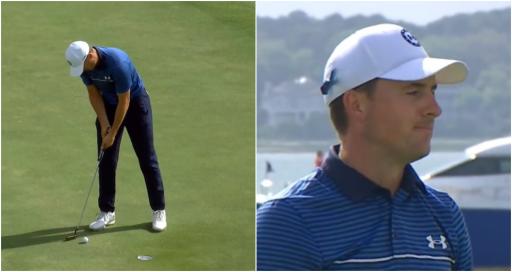 Jordan Spieth missed an 18-inch putt for par on the 18th green on moving day at RBC Heritage as Harold Varner III took a massive step closer to his first PGA Tour victory.

Related: Justin Thomas leaps to the defence of HVIII over Hoffmann comments

It has been well documented for a while now that Spieth is in the middle of another tough period with his golf.

For the first time in his Masters career he missed the cut at Augusta National and he has looked visibly frustrated.

But things at Harbour Town Golf Links have been moving in the right direction. He's gone 69-68-68 to be right in contention.

Although that third round 68 should have definitely been one stroke lower. By the time he reached 18, he was 4-under for the day.

He missed his 13 foot birdie putt then appeared to get frustrated before missing the 18 inch par putt. It was an absolute howler.

Varner said of his round: "Yeah, I think having a clean card was really what I wanted to do, just give myself a lot of looks.

"I think I was able to do that a lot and executed some putts as well.

"It was a lot of fun. I had a good time with Troy [Merritt]. I really just wanted to beat the rain honestly because I think it's coming."

Lowry (66-72-65) has continued his good form that saw him with a real chance of winning his first green jacket before his charge fizzled.

He said: "I feel like, without complaining too much, 65 is the worst score I could have shot.

"I hit the ball unbelievable today, and I didn't really hole anything. That putt on the last is probably as long as I've holed all day.

"It was getting quite frustrating for a while, but I hit it in pretty close a couple of times and made a couple of nice birdies.

"It was really nice to birdie the last and get myself into double digits for the tournament.

"Hopefully Patrick [Cantlay] doesn't go too far away from me on the back nine, and I can have a chance tomorrow."