Does Koepka vs DeChambeau rank in your top five of golf's BEST EVER RIVALRIES?

The feud between Brooks Koepka and Bryson DeChambeau has got us thinking: What is golf's greatest ever rivalry? 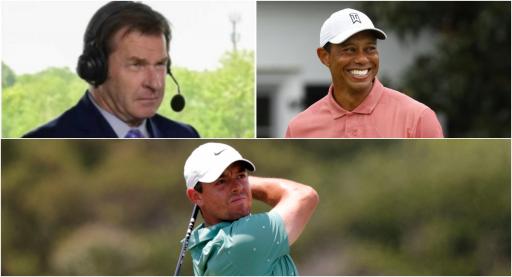 Golf has been blessed with so many phenomenal players over the years and these players have formed incredible rivalries that will always live in memory.
From Ben Hogan to Tiger Woods, from Europe to the USA, rivalry can bring the best out of any player and the golf that is produced as a result is second to none.
Take a look at our selections for golf's greatest ever rivalries:

There is no argument that the "Big Three" created one of the sport's greatest rivalries. Between them, they won a staggering 34 major titles and battled with each other throughout many decades.

One of the most memorable years was when Jack Nicklaus beat Arnold Palmer in a playoff to win the US Open in 1962. In that decade, the trio won seven consecutive Masters titles between them.

The "Big Three" were a common feature as honorary starters at The Masters every year, before Palmer's sad death in 2016. In April, Lee Elder joined Nicklaus and Player in the starters ceremony, which always represented the trios' friendship and rivalry.

The Ryder Cup has been a hostile and competitive event ever since the European Team made their debut at the Greenbrier in 1979. Since then, there have been many flashpoints that have created the rivalry which still exists.

The tension and controversy of the "War on the Shore" at Kiawah Island in 1991 is one of the most famous years in the cup's history, while the celebrations of the US team at Brookline in 1999 have also contributed to hostilities.

More recently in 2016, Patrick Reed beat Rory McIlroy in a pulsating match at Hazeltine which was full of passion and it personified the rivalry of the Ryder Cup.

During the 1980s and 1990s, Nick Faldo and Greg Norman regularly contended events around the world alongside other great players such as Seve Ballesteros and Bernhard Langer.

Norman was the first to win a major title out of the pair at The Open in 1986, but Faldo surged ahead in this department by winning five major championships between 1987 and 1992.

Both their rivalry and friendship reached their peak in 1996 at The Masters. Norman held a six-shot lead on the final day but suffered a famous collapse, allowing Faldo to win his sixth major title.

Phil Mickelson had already made two appearances at the Ryder Cup before Tiger Woods burst on to the scene in 1996, but Woods took no time in making his presence known on the PGA Tour.

Between them, they have won 127 tour events including 21 majors and unfortunately for Mickelson, there is no other player who has spent as many weeks at World Number. 2 without reaching the top spot as him.

This was arguably down to Woods, but it is fair to say that if one of them wasn't around, then the other would have enjoyed even more success.

This is probably the most classic and timeless rivalry of them all. Sam Snead won his first professional event in 1936 and Hogan secured his first title two years later.

Between the legendary pair, they won 146 times on the PGA Tour which includes 16 major titles as well. Snead shares the record with Tiger Woods for the most wins on the PGA Tour, while Hogan is only one of five players to have completed a career major grand slam.

Snead once said, "The three things I fear most in golf are lightning, Ben Hogan and a downhill putt." I think this quote sums up their relationship perfectly.