"Phil outdrive me? There is no way": Bryson DeChambeau on The Match

Bryson DeChambeau has been speaking ahead of The Match in which he and Aaron Rodgers will be facing off against Phil Mickelson and Tom Brady. 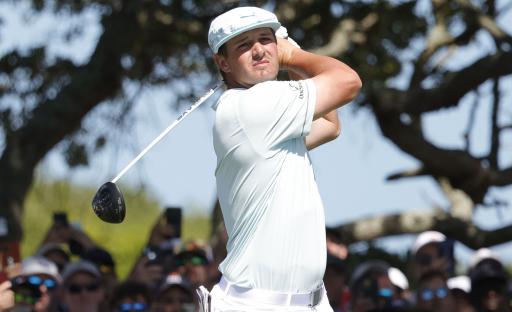 Bryson DeChambeau has said that PGA Champion Phil Mickelson has "no chance" of outdriving him when The Match gets underway.

In an interview with GolfWeek, DeChambeau discussed how he will prepare and practise with his big stick for The Match, which is set to take place on July 6th at The Reserve at Moonlight Basin in Big Sky, Montana.

"Phil outdrive me at The Match? There is no way," said DeChambeau to GolfWeek.

"That week I'm coming out with the long driver and I'll have the spin rate dialled in and there's no chance he'll ever get close to my ball speed. He won't get close to my drives."

DeChambeau will partner up with the Green Bay Packers quarterback Aaron Rodgers against Mickelson and his partner Tom Brady, who is a quarterback for the Tampa Bay Buccaneers.

It will be the fourth edition of The Match that was first played in 2018 when Mickelson came out on top against Tiger Woods, taking home the $9 million prize money in the process.

The 50-year-old will be hoping for more luck with his partner Brady in July, who lost the second edition of The Match when Woods got his revenge alongside former NFL quarterback Peyton Manning.

The six-time major champion teamed up with former NBA player Charles Barkley in the third edition of the fixture and they beat Manning and Steph Curry of the Golden State Warriors in the NBA.

DeChambeau is clearly very excited to tee it up for the first time in what has become a popular fixture and the dynamics amongst this fresh group of players should make for a great watch.