Dustin Johnson and Paulina Gretzky are FINALLY getting married 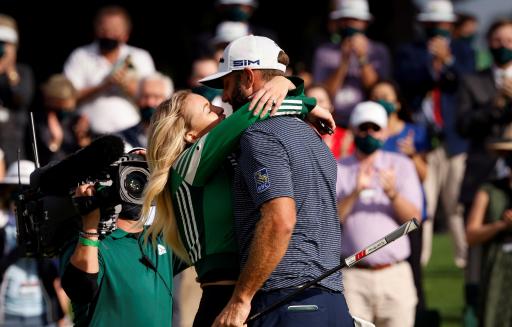 Dustin Johnson and Paulina Gretzky would finally appear to be getting married after their long-time engagement.

Gretzky, 32, posted a series of snaps and videos on her Instagram on Wednesday featuring Vera Wang wedding gowns. Gretzky has been engaged to the two-time major champion since 2013.

She then posted an Instagram photo of her with Wang, accompanied with the caption: "Women empowering women at its finest. Making my dreams come true. You are a queen & friend @verawang thank you [love heart]."

Wang then replied in the comments section: "Soooooo excited for you guys [clap hands]."

The photo has received thousands of likes, one of which was from the current World No.1 golfer.

Johnson, 36, is teeing up in this week's Valspar Championship on the PGA Tour where he looks to bounce back from an indifferent run of form.

Since winning the Saudi International on the European Tour in early February, Johnson has picked up just one top-10 finish in his last six starts.

He missed the cut at The Masters earlier this month and then finished tied 13th in his last start at the RBC Heritage.

Back in January, Gretzky said on 'The Netchicks' podcast: "I don't know if people know if me and Dustin are really married or not. We're not. I don't want anything from Dustin other than I love him."

NEXT PAGE: DUSTIN AND PAULINA SELL THEIR STUNNING HOUSE FOR $16.5 MILLION