Dustin Johnson was one of many PGA Tour players to celebrate Halloween, but not all of them partied with a former President of the United States... 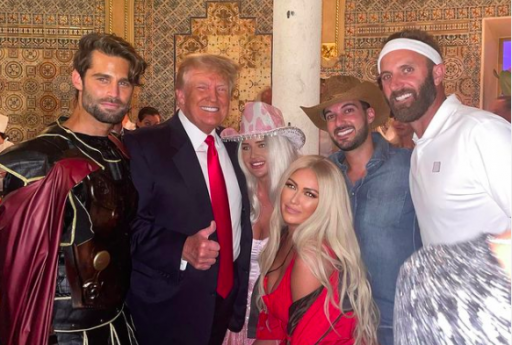 Halloween is always a fun time of the year when people go out in all sorts of fancy dress costumes and celebrate the holiday.

Dustin Johnson was one of many PGA Tour players to join in the festivities and his fiancé Paulina Gretzky joined him and their friends at what appeared to be a Halloween party.

On his Instagram page, it looks as though the former World No.1 was dressed as a tennis player and Gretzky went to the party as a lifeguard.

However, the most incredible part of the photo is that Johnson and Gretzky are standing alongside Donald Trump, the former President of the United States.

As we all know, Trump is a very keen golfer and he owns golf properties all over the world in places such as America, Ireland, Scotland and Dubai.

You have to double-take to realise that it actually is Trump in the photo. It is fair to say that he hasn't pushed the boat out with his fancy dress.

The 45th US President had his name in the headlines once again recently, as Trump Turnberry is rumoured to be one of the venues used on the proposed Saudi-backed golf series.

His golf property at Bedminster in New Jersey is also rumoured to be a venue on the controversial new tour. We are still waiting for more developments on this topic.

RELATED: PGA TOUR: HOW MUCH DID EACH PLAYER WIN AT THE BERMUDA CHAMPIONSHIP?

Trump has good relationships with the PGA Tour and its players, as is shown here in the picture with Johnson.

Last week, Trump was on a golf day with a number of people from different golf social media platforms in Florida and he made a FaceTime call to Bryson DeChambeau while he was on holiday in the Bahamas.

Despite being outvoted by the new president Joe Biden at the last election, he will always remain in and around the news as the controversial figure that he is.