Ian Poulter posts hilarious video of him jumping into a cocktail during his week off from the PGA Tour. 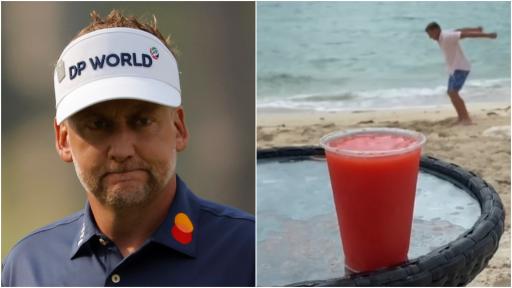 Ian Poulter may be winless on the PGA Tour this year but he has certainly raced to the top spot when it comes to Instagram in our eyes.

Poulter might now be 45 years old but he is keeping pace with the young guns on the PGA Tour when it comes to social media, reflecting none better than his latest post of him jumping into a cocktail.

Okay he didn't exactly, but it's very clever.

"Been nice to have a week off spent with family & friends and get stuck into a couple of cocktails," Poulter captioned his video post.

Poulter has been enjoying some down time away from the PGA Tour back home in the United States following a tie for 18th in his last start on the circuit at The CJ Cup last month.

He even played a round of golf with a couple of F1 drivers ahead of the US Grand Prix last week.

The Englishman's latest Instagram post has been met with a flurry of crying laughter emojis from the likes of Kirsty Gallacher, Mark Blundell and ourselves here at GolfMagic.

One golf fan though did not see the funny side of it when he commented: "Will someone start the golf tournaments up again? This guy has far too much time on his hands!"

We are pleased to report that Poulter will indeed be back on the PGA Tour this week at the World Wide Technology Championship.

Another golf fan wanted to emulate his post. "Clever, how do you do this stuff?!"

Poulter is currently ranked 51st in the world but remains winless around the world since the 2018 Houston Open.

NEXT PAGE: F1 DRIVER SLAMMED BY HIS OWN PR MANAGER FOR PLAYING TOO MUCH GOLF IN HIS SPARE TIME

Ian Poulter
PGA tour
Ryder Cup
Tiger Woods
instagram
Previous
F1 driver Lando Norris BLASTED by his PR manager for playing TOO MUCH GOLF!
Next
The reason why Tiger Woods and Roger Federer NO LONGER speak to each other

Equipment
Do FootJoy produce the BEST golf shoes on the PGA Tour?
LIV Golf
Kevin Na on Saudi: "People come up with rumours and they write things"
The Masters
Ian Poulter responds to golf fan after being called a d*** in his DMs
The Masters
Ian Poulter says he "felt like s---" after missing out on The Masters
PGA Tour
Will Lee Westwood get to wear Ian Poulter's famous gold lamé shirt?