Harry Higgs, Harold Varner III, Pat Perez and Joel Dahmen all represented their own charities in a fun game of Wolf in Texas. 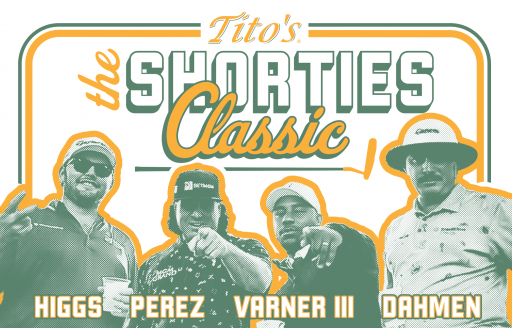 Wolf is a points-based game. On each hole, one player is the wolf. If they decide to play against the other three players as the lone wolf, they can win three points.

The 1st hole saw Higgs as the wolf and he chose to team up with Varner III and it was the latter who made a nice birdie at the Butler Pitch and Putt to give this pair a point each.

After a halved hole on the 2nd, Dahmen made a solid birdie alongside Varner III which gave him two points and Varner III three points. Higgs was still on one and Perez was pointless.

Holes 4 and 5 were halved which meant that two points carried over to the 6th hole. Varner III, who is yet to win on the PGA Tour, made another birdie which earned himself, Higgs and Dahmen five points each. The wolf Perez was still on zero.

The 7th and 8th holes were halved and as Perez still had 0 points on the final hole, Vega declared that the 9th was worth a huge 10 points.

Varner III showboated and holed a putt with one hand to become the winner and by far, the standout player of the event.

He finished on 18 points and earned $180,000 for his own charity, the HV3 Foundation. Dahmen, the winner of the Corales Puntacana Resort & Club Championship in 2021, won $170,000 for the MD Anderson Cancer Centre in Texas.

Higgs won $160,000 for David Feherty's Troops First Foundation and Perez earned $20,000 for Operation Game On which is another great charity that serves injured soldiers.

Tito's Handmade Vodka is now the official vodka of the PGA Tour and the match took place on Wednesday, January 5.

NEXT PAGE: SPOTTED: HAS PATRICK REED SIGNED FOR PXG AT THE START OF 2022 PGA TOUR SEASON?