Justin Thomas returns to Kapalaua where he last year uttered a homophobic slur and lost his Ralph Lauren deal in the process. 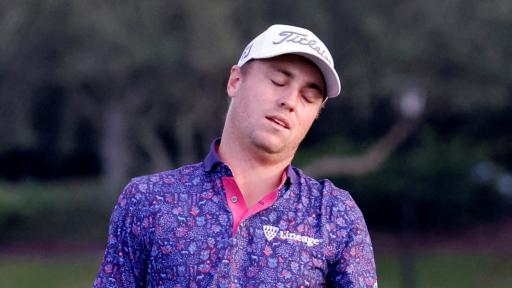 Justin Thomas admits he has "grown as a person" as he returns to the scene of his homophobic slur at the Touranment of Champions at Kapalua, the first event of 2022 on the PGA Tour.

Thomas uttered the homophobic slur when missing a par putt from five feet during the third round of this event last year.

It led to Thomas apologising for his choice of word after his round, and ultimately it would see him axed by Ralph Lauren as a brand ambassador.

Thomas, to his credit, nearly ended up winning the tournament last year, shooting 24-under par for the week to finish just one shot behind winner Harris English in a tie for second.

"I like to think I‘ve grown a lot as a person and had a lot of awkward and uncomfortable conversations and more so opened up my eyes and honestly made me realize some things about myself," Thomas said recently on an episode of the No Laying Up podcast.

"I was a little bit of almost like a hypocrite, if you will, because I’d see people make these mistakes and I think it’s so easy nowadays for people to attack the person or think, ‘He’s an idiot, what is he doing? He’s got no idea what’s going on,’ but then I flip it around and that happened to me, or I should say I made that mistake, and then I’m expecting people to not do the same thing to me."

RELATED: WHO IS JUSTIN THOMAS' FIANCEE?

"It was extremely difficult to figure out for a couple of months what kind of positive could come of this," added Thomas.

"It was insanely different than a failure in golf or a sport but it is still a failure in my life. Just as I treat my failures in golf, I try to learn from it.

"Although it took me a while because of the state of mind I was in, once I was able to sit down with my team and friends around me, ‘All right, let’s try to take this time to learn and get better from it.’

"Once you’ve already made the mistake that’s all you can do and I feel like I did."

"It was all this stuff that was kind of going on and it was like, ‘This is going to be the worst year of my life," said Thomas, who would go on to win the Players Championship in March.

But with a fresh outlook heading into 2022, Thomas is brimming with confidence as he returns to Hawaii this week.

Rumour has it that he even shot a 61 in practice earlier this week.

"It’s a fun golf course. It’s just kind of a laid back, feels like relaxed type vibe, but at the same time there’s going to be a winner crowned at the end of the week.

"When you come here, it’s pretty hard to not be in a good mood, you know what I mean?"

NEXT PAGE: BUTCH HARMON SAYS IF TIGER WOODS DOESN'T LEAVE HIM ALONE, HE'S GOING TO HIT HIM WITH HIS GOLF CLUB

Justin Thomas
PGA tour
Tiger Woods
bryson dechambeau
ralph lauren
Previous
Is your golf course waterlogged? Why not try STREET GOLF?
Next
Tiger Woods friend: "Next time we see him will be at the PNC Championship"