Collin Morikawa could become World No. 1 in Kapalua: "It's all in my control"

Collin Morikawa squandered the opportunity to become World No. 1 at the Hero World Challenge, but he has another chance this week in Hawaii. 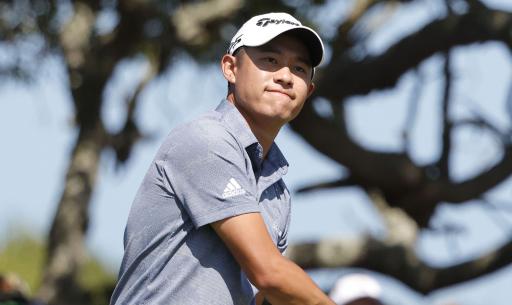 Collin Morikawa let go of a five-shot lead at the Hero World Challenge for Viktor Hovland to win the Bahamas event. Not only did he surrender the tournament, but he also missed the chance to reach the peak of the world rankings.

Nonetheless, this was a small blemish on the fantastic year that Morikawa had on the PGA Tour. He won The Open Championship on his debut at the event and also the Workday Championship too.

He is the only player to win two different major championships in his first appearance and he is one of only eight players to win two major titles before the age of 25 in the last century.

He won three out of his four matches on his debut at the Ryder Cup and he clinched the winning point for the American side which historically won 19-9.

Morikawa turned professional in 2019 which signifies his staggering rise in the sport's ranks even more. He is currently ranked at World No. 2 and if he won the Sentry Tournament of Champions this week, he could become World No. 1 if Jon Rahm finishes worse than outright second.

"Looking back there’s a lot of positives which I’m definitely going to make sure I continue to kind of feed off," said Morikawa, looking back on last season in Kapalua.

"I think you, that’s a big thing is, not just look at the negatives and not look at the downsides but is to look at the positives of what I’ve done well, and I’ve definitely been able to do that and how do improve from that.

"But there’s also a lot of aspects that I want to keep working on and that’s what’s great about what we do."

As you can see by his words, Morikawa is always looking to improve but in terms of world ranking positions, he can only improve one more place.

RELATED: SPOTTED: HAS PATRICK REED SIGNED FOR PXG AT THE START OF 2022 PGA TOUR SEASON?

Rahm, who won the US Open in 2021, has not appeared on the PGA Tour since the Fortinet Championship and we've not seen him on the European Tour since the Andalucia Masters in October. He could be leapfrogged on his long-awaited return this week.

"It’s all in my control. All I can do is try and win the tournament and that’s all I’m going to focus on," Morikawa added.

"It’s a huge goal, it always has been, and it means something that when you do get there it means you’re doing something right or at least a good amount of things right.

"It’s just about continuing that process and it’s not like that’s a peak, that I get to No. 1 and I can go retire and relax on the beach, like there are still so many things that I’m going to keep pushing myself when that, if or when that does happen."