From Frank Sinatra tunes belting out to the most amazing practice area you have ever seen: welcome to The Summit Club. 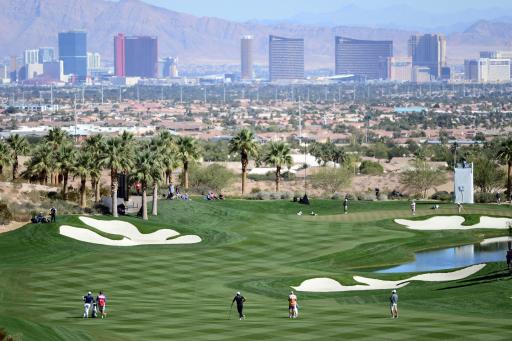 The PGA Tour is in Las Vegas for the second straight week and the high rollers are in town.

But they are currently missing in action as it's Robert Streb who has the clubhouse lead through 18 holes.

He made history when he found himself 7-under par through six holes at The Summit Club in a blistering start.

Streb surged to an opening round of 61 and leads by one stroke but is being chased down by a stacked field.

"Is that @JordanSpieth to a tee right there or what?"

He's made three straight birdies in Round 1 at The Summit Club.pic.twitter.com/FtutoJKS1o

One thing you'll notice this week is that the course looks completely different.

The tournament is usually played in South Korea but the PGA Tour had to up sticks and move it because of the pandemic.

So they're playing in the desert again.

The Summit Club is a par-72 layout playing at 7,431 yards with steep undulations and drastic elevation changes.

There are some Las Vegas touches thrown in too, so it's easy to see why the members love this place.

Here are four things you should know:

After finishing up at the par-3 seventh, there is a short tunnel as players make their way to to eighth tee box. Reportedly, Sinatra songs are played on a loop all day. I said that's life, that's what all those people say.

The practice areas are so pure you'll never want to leave

As everything you'd expect from a Las Vegas venue with millions of dollars coming into the place it is is pristine condition. The range boasts incredible views of the surrounding mountains. There is a short-game area which also doubles up as a par-3 course.

Collin Morikawa is a member, but doesn't have the course record

You'll keep hearing this over the course of the weekend. Morikawa is a member, and that is why he is one of the favourites to win. He shot an opening round of 5-under and is well placed. But he doesn't hold the course record. Morikawa told the media the lowest he'd scored around this place is 62, but he claimed he thinks Maverick McNealy has gone one better, although that is unofficial.

Unsurprisingly, money rules in Las Vegas. The singer Celine Dion reportedly lives nearby and the cheapest properties are valued at $1.5 million. If you want to become a member at The Summit Club, it will set you back $200,000 with annual dues of $39,000.

RELATED: FIVE OF THE MOST ANNOYING THINGS IN GOLF