Brooks Koepka and Viktor Hovland both took dead aim at the par-4 12th hole at The Summit Club with excellent results. 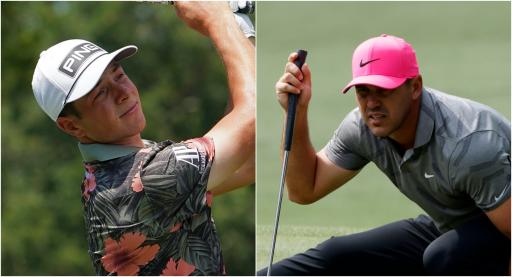 Brooks Koepka and Viktor Hovland may have had very different experiences at the Ryder Cup last month, but they had one thing in common in the first round of the CJ Cup.

On the 12th hole at The Summit Club, both players took their drivers out with the intention of driving the green and they both passed the test with flying colours.

First up was Koepka. He arrowed his drive high into the Nevada sky and his ball landed on the green and almost stopped immediately, without bouncing at all.

It is a 349-yard par-4, so it is fair to say that the four-time major champion absolutely crunched this tee shot. He went on to make a birdie and finish with a solid score of 5-under-par.

Anything you can do.

Viktor Hovland with a beauty of his own. pic.twitter.com/lskto4EwJ3

Hovland adopted the same strategy. His ball landed short of the green and rolled on to the putting surface. Much like Koepka, the Norwegian failed to make an eagle but he tapped in for a birdie.

Hovland, who made his debut for Team Europe at the Ryder Cup at Whistling Straits, was 5-under-par walking off the 12th hole and added two more birdies for a round of 65.

He sits four shots behind the 18-hole leader Robert Streb, who fired an incredible round of 11-under-par in Las Vegas.

This is Koepka's second appearance of the 2021/2022 PGA Tour season. He finished in a disappointing 67th place at the Shriners Hospitals for Children Open.

Hovland, 24, also finished well down the leaderboard in 44th place at TPC Summerlin, but he is in much better shape to pick up his third PGA Tour victory this week.

NEXT PAGE: WATCH: JORDAN SPIETH HITS THE GREATEST FLOP SHOT ON THE PGA TOUR THIS YEAR!