Chesson Hadley had been in the driving seat but he bogeyed the final three holes at Congaree, as Garrick Higgo waited in the clubhouse. 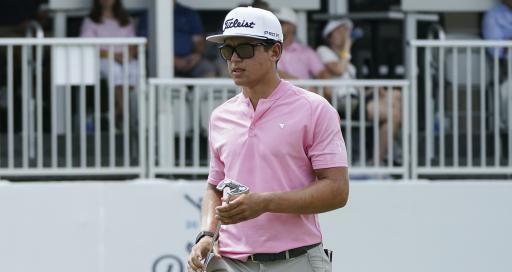 Garrick Higgo has won his first PGA Tour title at the Palmetto Championship, finishing on 11-under-par and one shot ahead of six different players at Congaree.

The 22-year-old South African has won on what was only his second start on the PGA Tour. He shot a final-round 68 to finish ahead of Chesson Hadley who seemed to have the tournament in the palm of his hand.

"It's amazing, I just stayed patient all week. I've worked so hard with my coach Cliff on my short game and my putting and all the guys at Titleist and all of that has paid off," said Higgo.

"Firstly, I'm just happy that I don't have to play a playoff right now. I'm going to take all the good things, I can't wait to see my family. Hopefully, they can come over, I am very lucky that my mum is here. I just love my family."

Higgo began the final round six shots behind Hadley, who started on 14-under-par. However, the leader made two bogeys in his first five holes while playing partner Harris English surged.

The World No. 26 made three birdies in his first five holes to draw level with Hadley on 13-under-par. English was hunting the fourth PGA Tour victory of his career and his second win of the season.

Both players made more mistakes and with eight holes remaining, they were locked together on 12-under-par, while Higgo was four behind on 8-under-par at this stage.

With four holes remaining, the World No. 1 Dustin Johnson was 4-under-par for his round and looked to be dangerously stalking the leaders as well.

However, the two-time major champion suffered a disaster on the par-4 16th hole, carding a triple-bogey seven to fall out of contention at Congaree and finish in a tie for 10th.

English made errors on the back-nine too. He made bogeys on 11th, 13th and 14th holes to fall back to 9-under-par, while Hadley steadied the ship with a birdie on par-5 12th hole to climb back to 13-under-par with 3 holes remaining.

As English fell away, the South African Higgo crept up the leaderboard as he made an eagle at the par-5 12th hole to sit just two behind Hadley on 11-under-par.

Higgo posted 11-under-par in the clubhouse and he watched on as Hadley bogeyed the 16th and 17th holes and he missed a putt for par on the 72nd hole to miss out on a playoff.