Harris English and Matt Kuchar have won the QBE Shootout three times. Can they win a fourth at Tiburon Golf Club? 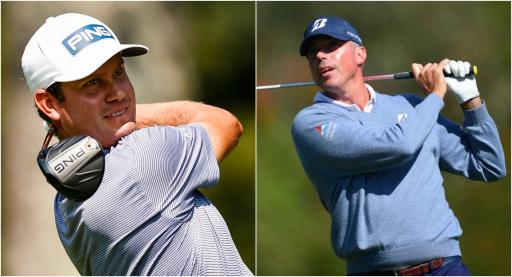 The QBE Shootout is a field of 12 pairs and it is one of the most unique formats on the PGA Tour. Harris English and Matt Kuchar have established themselves as the gatekeepers of the tournament in recent years.

The American pair first won the event back in 2013 and last year, they won it by a record nine strokes on 37-under-par ahead of three other pairs in second place.

Lexi Thompson, fresh from her eighth-place finish in the CME Group Tour Championship, will tee it up with two-time Masters champion and 2007 QBE Shootout runner-up Bubba Watson.

Will Zalatoris, the winner of the PGA Tour Rookie of the Year award, has replaced US Ryder Cup captain Steve Stricker in the field to partner with Sean O'Hair.

The format is over a 54-hole schedule. The first round will see a scramble where each player tees off and they choose to play from the best drive. This process is repeated for every shot.

They play greensomes in round two. Greensomes is much like foursomes except both players tee off. They choose the best tee shot and then they play alternate shots from that point.

The third and final round is better-ball. Each player in the pair plays their own ball and the best score between them on each hole counts. This is why we see such low scores at the QBE Shootout.

Below is our top selection for the 2021 renewal, and yes, it is the obvious one.

RELATED: JORDAN SPIETH HAD A MARE BUT STILL WON A FORTUNE AT THE HERO WORLD CHALLENGE

For a pair that clearly excel in this format, 13/2 is a very reasonable price for Harris English and Matt Kuchar. They are both experienced PGA Tour players who have played in the Ryder Cup, the most prestigious team event of all.

English had a fantastic season in 2021. He won the Sentry Tournament of Champions and the Travelers Championship, as well as finishing tied 18th at the Tour Championship.

The last 12 months haven't been Kuchar's finest, it has to be said. But he still has nine PGA Tour victories on his record and a relaxed event like this could suit the 43-year-old in his search for form.