Tiger Woods gives golf journalist another chance to ask his question after he fumbled his lines. 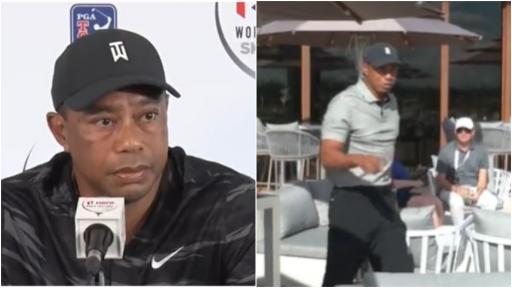 Tiger Woods gave golf journalist Daniel Rapaport another chance to ask a question to him after he fumbled his lines during a press conference at the Hero World Challenge in the Bahamas.

Rapaport, who writes for Golf Digest, was initially on hand to pose a question to Woods when he spoke to the media for the first time last Tuesday since his horror car crash in Los Angeles back in February.

"How realistic was amputation as an option," Rapaport asked Woods.

"It was definitely on the table," replied Woods.

Rapaport then recalls how Woods 'stared into his soul' with that response, and as a result, he then froze ahead of his next question that he had lined up.

"And, my other question is… um… I forgot," said Rapaport.

But to Woods' credit, he gave Rapaport another shot to ask his question later in the week.

WATCH THE HILARIOUS VIDEO BELOW

In case you wanted to know what exactly Rapaport wanted to ask him, it was about bench pressing.

Woods teased Rapaport before he went to sit down with him.

"Are you going to ask two questions or one?" joked Woods.

"How much can you bench press right now?" said Rapaport.

Woods replied: "When I first got home and all I could do was bench press, I got to probably 250-255. But now that I’m doing more other stuff, functional stuff, I’ve gone away from benching."

Fair play, Tiger. Everyone is entitled to a mulligan every now and then, even us journalists.

NEXT PAGE: TIGER WOODS RESPONDS AFTER BEING ASKED WHETHER HE WILL PLAY IN PNC WITH CHARLIE

PGA Tour
Tiger Woods' mother's brutal nickname for Phil Mickelson? "Hefty"
US PGA
"Awful, I did nothing" Tiger Woods "stronger" after post-Masters misery
Equipment
Nike have the BEST golf caps as worn by stars on the PGA Tour!
US PGA
Paul Casey FORCED OUT of 20th appearance at PGA Championship
US PGA
Tiger Woods arrives at Southern Hills to practice ahead of PGA Championship