Joaquin Niemann let a 4-year-old hit a shot during a practice round ahead of this week's Valspar Championship. 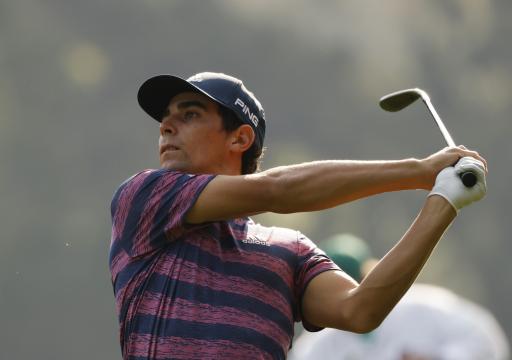 Joaquin Niemann left a 4-year-old and his family with memories that will last a life time ahead of this week's Valspar Championship.

As he prepared to face one of the toughest courses on the PGA Tour schedule at Copperhead this week, Niemann stopped during a practice round to interact with a young golf fan with a very impressive swing for his age.

The 22-year-old rising star from Chile has quickly made a name for himself as one of the brightest talents on the PGA Tour and has already risen to 32nd in the world rankings, with many tipping him to become a top 10 player in the future.

On Wednesday, Niemann stopped during his practice round and approached the young golf lover who was accompanied by his mother and asked him to show off his swing, before inviting him to take a shot.

WATCH THE FANTASTIC MOMENT IN THE CLIP BELOW:

Golf fans were quick to praise Niemann in the comments below the tweet.

"Class. Love to see this sort of interaction from sports people with young kids," said one fan.

Bryson DeChambeau: What's in the bag of the US Open champion in 2021?
Ian Poulter misses the cut at Wells Fargo Championship with son Luke on the bag

"Love this! That young boy and his family will remember this forever!" said another.

"Amazing...what a fantastic thing to do," read another comment.

This week's field includes the top two players in the world rankings, with Dustin Johnson and Justin Thomas both returning to action, whilst other majors winners will also tee it up at Copperhead, including Patrick Reed, Louis Oosthuizen, Justin Rose and Phil Mickelson.

NEXT PAGE: Justin Thomas confident Rory McIlroy will get back to his best on PGA Tour