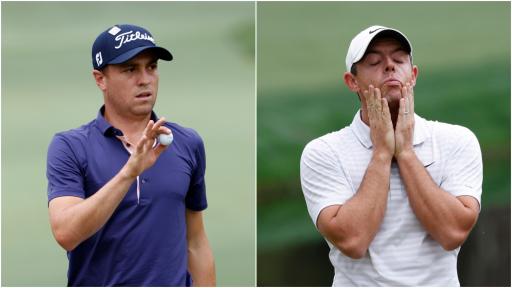 They might be on different sides when it comes to the Ryder Cup later this year, but Justin Thomas and Rory McIlroy have a lot of respect for each other as two of the best players we have seen on the PGA Tour in recent years.

McIlroy has experienced more success than many golfers can ever dream of and although his recent struggles haven't been of the same magnitude of the likes of Rickie Fowler, the Northern Irishman is currently going through a bit of a rough patch.

Having slipped down to 13th in the world rankings and missed the cut at crucial tournaments such as The Players Championship and The Masters, McIlroy recently turned to renowned golf coach Pete Cowen to get his game back on track.

McIlroy admitted himself that he damaged his game by chasing a few extra yards as a result of Bryson DeChambeau's recent success, but he hopes that with the help of Cowen it won't be too long before we see the McIlroy that has claimed four major titles in his career.

Whilst McIlroy's struggles continued at TPC Sawgrass, it was Thomas who went on to win The Players Championship, adding the iconic tournament to his list of accomplishments.

With Thomas teeing it up at the Valspar Championship this week, the American was asked if McIlroy's recent form had come as a surprise to him.

"Yeah, I'm very surprised," he replied. "I think we all are. Rory is one of the most talented golfers I've ever played with, but I think something that is very underrated and people don't realise is how hard he works.

"I mean, he's out there a lot, puts in a lot, a lot, a lot of hours, and he's very similar to me to where he always wants to get better, probably to the point where it hurts him at times, like it does myself. I've often spent time with my putting or my golf swing trying to perfect it when in reality I just need to make work with what I have."

RELATED: Our TOP THREE bets for the Valspar Championship

Adding a new coach to his team is something that Thomas believes can often help lead to success further down the road, as it gives players another perspective on their game and how they can go about improving.

"I have no issue with him getting another opinion," Thomas added. "It's just having that second opinion, and sometimes hearing it said a different way just clicks for you, but then sometimes altogether a different coach just might -- the methods and theories might make more sense to you."

Thomas admires McIlroy for his work ethic and has no doubts that he will get back to the winner's circle some point soon.

"The thing about Rory is I know he's going to work through it and he's going to win a lot more tournaments and a lot more majors. I still and always will have maybe more respect for him than anybody because he's one of the nicest guys I've ever met for how much success he's had."

We've seen plenty of top players have a dip in form and come back from it, you just have to look at Jordan Spieth to know that the best never actually lose their ability to win, but it can sometimes just take a while to get that spark back.

Thomas has had his own struggles on the PGA Tour and before his win at The Players, he too was finding it difficult to bring out his best on the golf course.

"We're never as far off as we think we are, but it's just internally," reflected the World No.2. "When you're out there and you're not playing well and you're down on yourself, you feel like you're so far away. It's a lonely sport because you obviously have your caddie out there with you, but it's easy to just kind of get down on yourself, at least for me, get kind of in a dark hole and feel helpless.

"It's a terrible feeling. It's hard to explain."