John Daly has always been a popular player on the PGA Tour for his powerful play and flamboyant clothing. 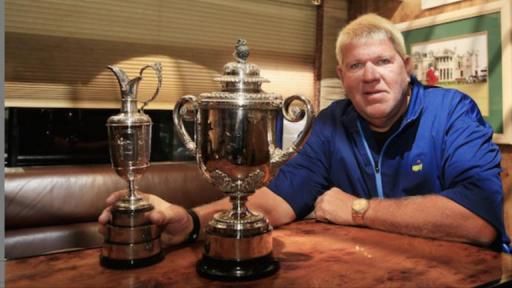 Before the likes of Dustin Johnson, Rory McIlroy and Bryson DeChambeau started hitting the ball over 350 yards on a regular basis, John Daly was an instantly recognisable figure on the PGA Tour with his booming drives.

His popularity only increased when he began wearing trousers with superb colour patterns and styles, which matched well with his trademark long, blonde hair.

He has never been afraid to express himself and this has not only been evident on the course but off it as well. The two-time major champion was recently spotted in a bar singing 'Knockin' On Heaven's Door' by Bob Dylan.

WATCH BELOW AS DALY SINGS IN A BAR

Golf fans loved the video and left their comments:

"Dude is just out there living his best life," one fan commented.

"I wish my drunk karaoke went like this," another fan said.

It seems that many fans would have loved to be in Daly's easy-going position on stage, especially with the incredibly tough times that we have experienced during the Coronavirus pandemic.

The 54-year-old has had a fantastic career on the PGA Tour, a career that first took off in 1991 when he won the PGA Championship.

Daly was the ninth reserve for the tournament and only gained entry when Nick Price pulled out, which meant Daly travelled to Crooked Stick Golf Club having not played the course before.

The five-time PGA Tour winner secured his second major title in 1995 when he beat Constantino Rocca in a playoff to win the Open Championship.

NEXT PAGE: RORY MCILROY EARNS AN AMAZING $1,920 PER SWING ON THE PGA TOUR