Tony Finau is currently ranked 30th in driving distance but he is confident he is the longest hitter on the PGA Tour. 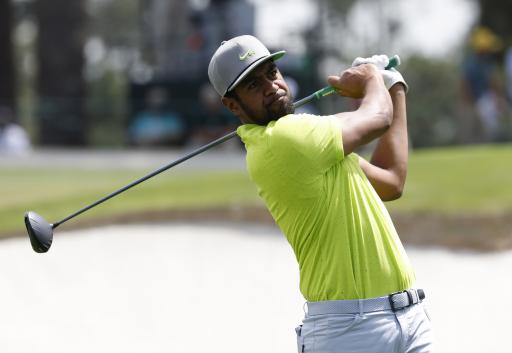 Tony Finau made it clear that he is not interested in chasing extra distance, after a reporter questioned his position in the average driving distance statistics on the PGA Tour.

The American is known for being a bomber off the tee and it wasn't too long ago a video emerged of Finau crushing a ball during a practice session using a full swing, something he is not known for doing.

The video went viral and caused golf fans to question whether Finau was going to extend his swing in an attempt to gain extra yards and keep up with the likes of Bryson DeChambeau.

Finau, who has become known for his unstereotypical half-swing, clealy has plenty more in the tank should he need it, but the World No.12 is not interested in gaining more distance.

Speaking to a reporter ahead of this week's Zurich Classic where he teams up alongside fellow bomber Cameron Champ, Finau was reminded that he is currently 30th in average driving distance list on the PGA Tour.

"You're 30th right now this year, Tony, in driving distance. Are there 29 guys longer than you?" said the reporter, which caused Finau to crack a smile and laugh.

While other players have made changes to their body and swing in an attempt to find more distance off of the tee, Finau revealed he is simply not bothered by it and feels as though some players on the PGA Tour are perhaps trying to boost their ego by out-driving their opponents.

“The driving distance stat, to me just seems, it doesn’t mean as much to [me] maybe as it does to some other guys, as far as their ego,” he said. “I’m not big on the driving distance stuff. I think your scoring average and winning golf tournaments is ultimately why we’re out here. I’ve played a lot of high-level golf and I’m more interested in that than the whole distance debate deal.”

Finau is clearly confident in what he is currently doing on the golf course, however he suggested that if he wanted to out-drive the rest of the field, he would struggle to find someone who could keep up with him.

“I think if we were all to maybe tee up four or five golf balls on the range and just let loose, I have a hard time believing somebody is going to hit it further than I am,” he added. “When I was younger, I got up to about 212 ball speed with a standard driver, which is pretty fast. I don’t know if I quite have that, but I‘ve gotten up to 206.”

NEXT PAGE: Rory McIlroy earns an AMAZING $1,920 per swing on the PGA Tour