Jordan Spieth played with a similar bag at the AT&T Pebble Beach Pro-Am in February and he is back with another design this week. 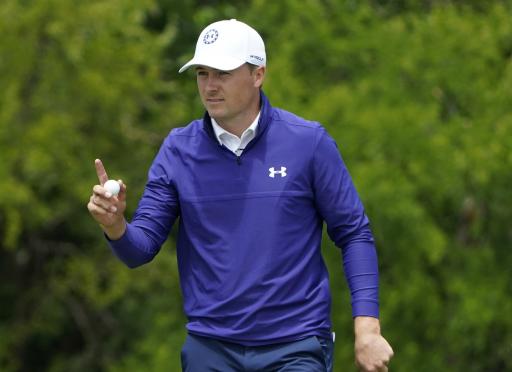 Jordan Spieth challenged fans to design his golf bag this week at the AT&T Byron Nelson, as part of his partnership with the company.

As part of the AT&T Artistic Drive contest, Spieth chose from a number of superb designs to be seen on his golf bag at TPC Craig Ranch this week.

One fan named Rob was the lucky winner of the contest, after the World No. 28 was allowed to chat with each contestant and reveal the winner.

GolfWrx managed to catch a shot of Spieth's caddie Michael Greller alongside their brand new bag. Golf fans commented on the eccentric design:

"Bag looks good. Not too sure about Michael Greller though," one fan commented.

"It's gonna be a no from me dawg," another fan commented.

"What's he going to do with it afterwards? Be a good donation!" another fan said.

"Other than the tweetybird...yeah," one fan said.

At the AT&T Pebble Beach Pro-Am in February, the 27-year-old took a golf bag to the tournament which was designed by acclaimed artist Matt Corrado.

Corrado, who has almost 15,000 followers on Instagram, designed a colourful, trademark bag that Greller would carry at the famous golf course.

AT&T own the branding rights to Spieth's golf bag and have used their privileges to promote art, which is one of Speith's passions away from the golf course.

Although the three-time major winner hasn't matched the excellence of Sam Burns during the first two rounds, Spieth is still in contention and sits six shots behind with two rounds left at the AT&T Byron Nelson.