Jordan Spieth rolled in a great eagle putt at the final hole on Saturday to finish just three shots behind Sam Burns at TPC Craig Ranch. 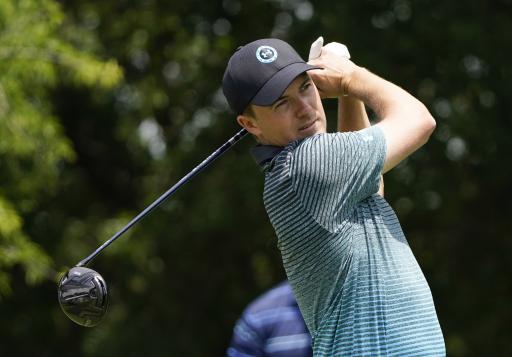 Jordan Spieth eagled the 18th hole for the second time of the week to remain in contention at the AT&T Byron Nelson with one round remaining.

Spieth began the day six shots behind Sam Burns but a superb score of 66 on Saturday made sure that he would be in contention in his home state heading into the final round.

The 27-year-old made three birdies on the front nine to advance to 14-under-par for the tournament, four behind the leader's score after nine holes.

Although the Texan made two bogeys on the back nine, Spieth made three birdies and yet another eagle on the par-5 18th hole, his second eagle of the week on the hole to finish on 17-under-par.

Burns, who won his first PGA Tour event at the Valspar Championship earlier this month, began his third round with a bogey on the opening hole, which was his first bogey in his last 36 holes, but he put that behind him with a birdie at the par-4 3rd hole.

The World No. 44 is one of the most in-form players on the PGA Tour at present and he made two more birdies on the front nine to move to 18-under-par for the tournament.

The 24-year-old added two more birdies to finish on a leading score of 20-under-par, which is the record-low score after 54 holes at the AT&T Byron Nelson.

Kyoung-Hoon Lee also fired himself into contention with a 5-under-par 67. The South Korean made four birdies on his back nine to finish on 19-under-par, and one behind Burns in second place.

Experienced PGA Tour player Matt Kuchar began the third round at TPC Craig Ranch six shots behind Burns but the 42-year-old, who last won on tour in 2019, only made one bogey on the par-3 15th hole in his round of 66. He sits just three shots behind Burns heading into Sunday.

2011 Masters champion Charl Schwartzel, who is winless on the PGA Tour since 2016, joins Spieth, Kuchar and Alex Noren on 17-under-par in tied third.