JT Poston must've thought his ball was doomed as it bounced across the wood on the edge of a lake at Kiawah Island, but he could breathe a sigh of relief when it came to rest. 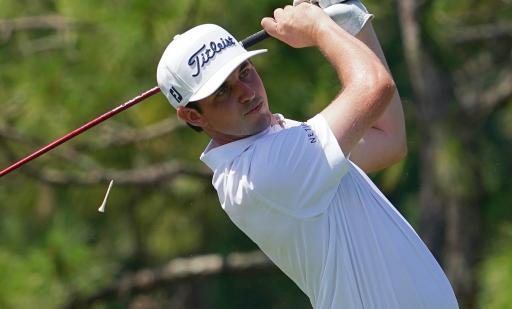 JT Poston hit his shot from the middle of the 13th fairway to the right of the green and he must have expected the worst as his ball trundled along the wooden edge of the water.

But to his and everyone's amazement on the broadcast, Poston's ball rolled along the wood and stayed dry and above ground next to the green.

It is the sort of luck that every golfer in the world dreams of having when they play and Poston went on to make what turned out to be a miraculous par on the difficult 13th hole.

Although the World No. 88 benefitted greatly from this twist of fortune, it did not help him from finishing with a 6-over-par 78 on Friday.

The 27-year-old, who won the Wyndham Championship in 2019, struggled on day one of the PGA Championship too. He made three bogeys and a double-bogey during his first round to shoot 3-over-par and is now extremely likely to miss the cut.

"Cause...the more he practices, the luckier he gets," one fan said.

"Seen that just then, mate mine would of been straight in that water," one fan commented.

"I’ve benefited from some lucky breaks in my golf game, but JT Poston just got the craziest bit of luck I’ve ever seen," another fan said.

Poston has struggled to find consistent form on the PGA Tour this season. Although he finished third at the Sanderson Farms Championship in October, he has missed eight cuts in his last 19 events.

NEXT PAGE: PHIL MICKELSON LEADS THE WAY DURING SECOND ROUND AT PGA CHAMPIONSHIP