Phil Mickelson LEADS the way during second round at PGA Championship

Phil Mickelson rolled back the years on day two of the PGA Championship, shooting 3-under-par in a round where the wind began to seriously pick up. 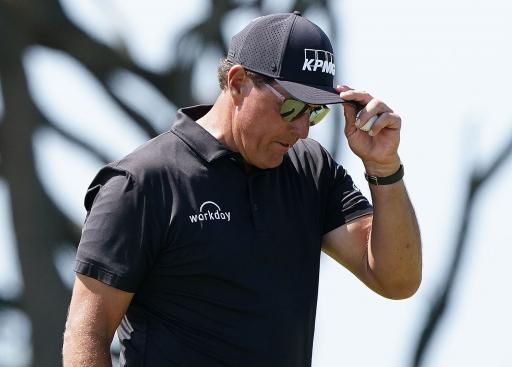 Phil Mickelson shot an impressive 69 on day two of the PGA Championship to lead the tournament on 5-under-par alongside South African Louis Oosthuizen.

The experienced lefty had a mixed bag on Thursday at Kiawah Island, making six birdies and four bogeys on his way to a solid score of 2-under-par.

He was three behind the overnight leader Corey Conners, but the Canadian couldn't emulate his superb play from the first round at the Ocean Course. Conners struggled to a 3-over-par 75 to leave the door open for Mickelson.

The five-time major champion began his second round in disappointing fashion, making three bogeys on his opening nine. But he battled back to complete his final nine holes in 5-under-par to shoot a 69 and lead the tournament on 5-under-par.

Mickelson has not won a major title since 2013 when he won the Open Championship at Muirfield and it is 16 years since he won his maiden PGA Championship at Baltusrol Golf Club.

Oosthuizen, who finished second at the 2017 PGA Championship, almost completed his round of 4-under-par on Friday without a bogey which shows how well the 2010 Open champion played.

The 38-year-old held the lead on 6-under-par on the 18th green, but unfortunately, he made his first bogey of the day to drop back on to 5-under-par with Mickelson

Two-time PGA champion Brooks Koepka shot a solid 71 on day two in South Carolina to finish one behind the leaders, while this year's Masters champion Hideki Matsuyama shot 4-under-par to sit two behind the leaders and remain in the thick of the things for the weekend.

It would be the perfect explanation of the longevity of Phil Mickelson’s career if he somehow becomes the oldest major winner in golf history while remaining the last amateur to win a PGA Tour event.

It's a Friday, the sun is shining, and @PhilMickelson is on top of the leader board at the #PGAChamp life is good!

How about Lefty! I love it when the old guys school the youngsters! How cool would it be if he becomes the oldest golfer to ever when a major on the PGA Tour! #Lefty#philmickelson#pgachampionship pic.twitter.com/yPkXJ1gDP4

Longest course in major history and 50-year-old @PhilMickelson is leading.