John Daly won the 1991 PGA Championship and it is always great to see the popular American return to the tournament each year. 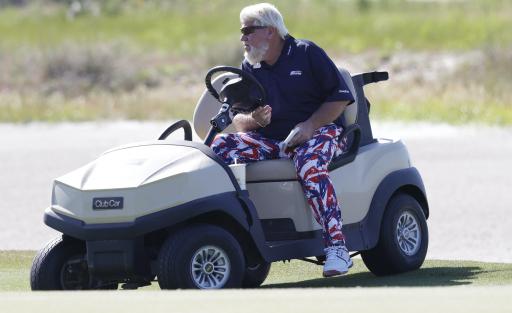 John Daly has long been one of the most popular players on the PGA Tour, as a result of his powerful play and relaxed demeanour.

The big-hitting American often has to use a buggy when he plays in tournaments due to medical reasons, and he stumbled across a bit of trouble when driving his buggy on a sandy path at Kiawah Island.

Luckily for the 55-year-old, there were a group of fans stood next to where he got stuck and they were able to lift up the rope and push Daly's buggy for him.

The vehicle managed to overcome the deep sand that had held up the wheels and the two-time major champion was able to drive on and continue with his round.

Golf fans reacted to the video on social media:

"Might be outplayed but I can guarantee you he’s leading on the Diet Coke and heater leader board," one fan said.

"I love this man," another fan commented.

Although Daly has experienced previous success at the tournament, his major-winning days may be behind him as he struggled to an 85 on day one of the championship on Thursday.

The 1991 PGA Championship will not only live long in Daly's memory but for any golf fan's memory too. The man from California was the ninth reserve for the tournament and hadn't had the chance to play Crooked Stick, which was the host venue.

Nick Price pulled out due to the birth of his first child which allowed the then-25-year-old Daly to enter and incredibly secure his first major title.

He doubled his tally of major championships in 1995, beating Constantino Rocca in a playoff at St. Andrews for the Open Championship. Prior to the playoff, Rocca famously made a long putt on the 72nd hole to force the extra holes.