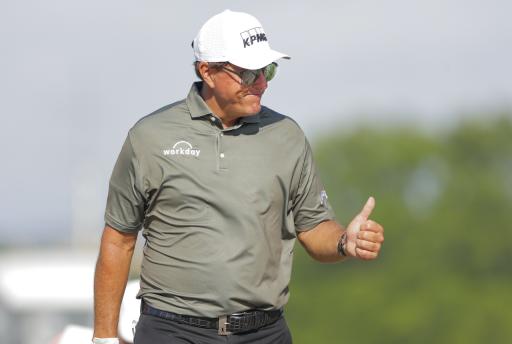 Phil Mickelson made history at the PGA Championship by becoming golf's oldest ever major winner at Kiawah Island, picking up the second Wanamaker Trophy of his career.

The celebrations started and haven't stopped at the Mickelson household and recently, Lefty took the opportunity to pour some wine into the trophy and take a sip.

The 50-year-old said that the wine tasted nice, but the fact that he was drinking from the Wanamaker Trophy made it taste all the more sweeter.

Mickelson defied the odds and his age to win his sixth major title in South Carolina and he has the opportunity to win the US Open at Torrey Pines later this month, in his home city of San Diego.

Although the 45-time PGA Tour winner missed the cut at the Charles Schwab Challenge last week, the 2021 season will now always live long in the memory of his career.

He has been extremely active on social media too and this video is just another example of how the American enjoys engaging with his thousands of fans.

"I want to be Phil. I need to be Phil," one fan commented.

"That Wine gets better with age.. just like my man Phil," another fan said.

"Congratulations! That was the missing touch in our wine," another fan commented.

"Perfect form on the trophy sip, forearms are activated," one fan said.

NEXT PAGE: GOLF BETTING TIPS: OUR TOP BETS FOR THE 2021 MEMORIAL TOURNAMENT