Si Woo Kim's ball hung on the edge of the cup on the par-4 3rd hole before dropping, but the rules official stated that Kim had not made a birdie. 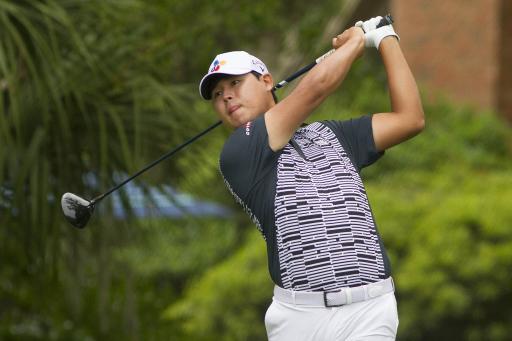 Si Woo Kim was unfortunately denied a birdie during his third round at the RBC Heritage after his putt took too long to drop after it reached the edge of the hole.

The rule is that the ball has the time it takes for the player to walk to the hole without "unreasonable delay", plus an extra 10 seconds but Kim's ball took over a minute to fall.

WATCH THE VIDEO BELOW AS KIM IS DENIED A BIRDIE

Si Woo Kim's birdie putt hung on the edge for over a minute.

Per the rules, a stroke will be added and it will be counted as par since it took longer than 10 seconds to drop. pic.twitter.com/jU3ayv9Mu2

The PGA Tour rules official Stephen Cox explained to Kim and his playing partner Matt Kuchar that an additional stroke is incurred to account for how long the ball took to drop, so Kim carded a par instead of a birdie.

Kuchar spoke in favour of Kim on the par-4 3rd hole because he was convinced that the ball was still moving, so they could wait for it to drop while it was still in motion.

Cox explained that even if the ball appears to still be moving, the player can tap it in or wait for it to drop, but the ball must drop within the 10-second window.

Golf fans on social media had their say on the incident:

I'm afraid to say the rules official Mr Cox is wrong, you cannot hit a moving ball, Matt witnessed it moving, this is totally wrong. Free Si Woo Kim and give him his birdie back.... please!

This seems ridiculous to me. If the ball came to rest on the edge okay whatever, but the ball was still moving??? Like Kuch said you can’t hit a moving ball. This seems like a bogus call to me, maybe add some details to the rule?

What was he supposed to have done? If he’d have tapped it in whilst it was moving, someone would have phoned in and reported him for hitting it whilst moving

Kim's putter was on centre stage at The Masters last week when he snapped the club on the 15th hole at Augusta National, meaning he had to putt with his three wood for the rest of the round.

The talented South Korean shot a level-par 71 on Saturday at Harbour Town Links, which left him in a tie for 42nd place heading into the final day.

Stewart Cink holds a commanding lead five-shot at the RBC Heritage after he carded a 69 on day three to finish on 18-under-par.

NEXT PAGE: STEWART CINK HOLDS A FIVE-SHOT LEAD HEADING INTO SUNDAY AT THE RBC HERITAGE

The Masters
Si Woo Kim SNAPS HIS PUTTER on day two at The Masters!
The Masters
Justin Rose leads The Masters but Jordan Spieth makes his move
PGA Tour
Si Woo Kim may soon have to leave the PGA Tour to do military service
PGA Tour
Brooks Koepka SPLITS with golf coach Claude Harmon III
Equipment news
What's in Si Woo Kim's bag as he wins The American Express on the PGA Tour