Stewart Cink shot a 69 on Saturday to set the lowest 54-hole score in the tournament's history on 18-under-par. 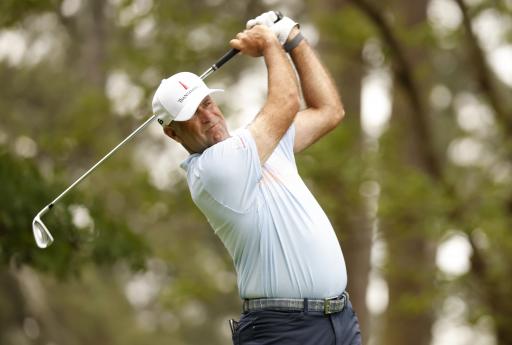 Stewart Cink remained well on course to win the RBC Heritage after he shot 2-under-par in the third round to lead by five shots from Collin Morikawa at Harbour Town Golf Links.

The 47-year-old made his first bogey since the first round on the par-4 3rd hole, but Cink put that behind him and birdied the next two holes to keep his healthy advantage.

The World no.115 almost ran into trouble on the 12th hole when his ball rested on a stick next to a tree to the left of the fairway, but Cink found the edge of the green with his approach and saved par.

Having won this tournament twice already, Cink couldn't match his superb first two rounds on Saturday but another birdie at the 14th hole helped to maintain his strong lead on 18-under-par.

Morikawa will tee off in the final round alongside the 2009 Open champion after he shot a 4-under-par 67 to finish on 13-under-par for the tournament.

The USPGA champion made three consecutive birdies on the back nine, which saw a superb tee shot on the par-3 14th hole. He added another birdie on the 17th hole to remain in touch with Cink.

Emiliano Grillo shot a superb 7-under-par 64 on Friday and the Argentine followed this up with a score of 2-under-par in the third round at Harbour Town Golf Links.

The World No.141 won his first PGA Tour title at the Frys.com Open in 2015 and he made four birdies and two bogies to finish in third place on 12-under-par, in pursuit of a second victory in America.

Matt Wallace and Sungjae Im both finished on 11-under-par in a tie for fourth place. Wallace shot a 65 on Saturday which was a vast improvement on his second-round score of 72, while Im shot a 2-under-par 69 in the third round.