In 2001, Tim Herron lost his cool at what used to be called the Canon Greater Hartford Open and entertained the crowd by snapping his putter. 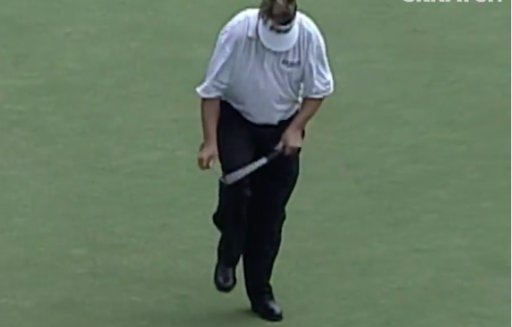 There have been many memorable moments from the Travelers Championship down the years and in 2001, Tim Herron provided one of his own for both good and bad reasons.

20 years ago, the tournament was called the Canon Greater Hartford Open and it was won by six-time major champion Phil Mickelson. Lefty then doubled his career tally at the tournament in 2002.

Unfortunately, it wasn't the week to be for Herron and his frustration got the better of him at TPC River Highlands. After rolling in a short putt, Herron bent his putter over his knee and held it up to entertain the crowd as if it was a trophy.

Sometimes, golf can cause anger and frustration that we can all relate to, no matter if you are a club golfer or a PGA Tour player. Herron may have been frustrated with the way he played that week in Connecticut, but this does not reflect the great career that the 51-year-old has had so far.

Herron has picked up four wins on the PGA Tour in his career with his most recent win coming at the Bank of America Colonial Open in 2006.

Golf fans reacted to the footage of Herron snapping his putter:

"If you haven't had the same feeling then you ain't golfing. I just can't afford a new putter after every round," one fan said.

"People from PING not so happy..." one fan commented.

"Where is Lumpy these days?" another fan commented.

"Imagine they fined golfers like they fine tennis players," one fan said.