Golf Majors 2022: When and where are the four major championships?

The weeks are ticking by on the PGA Tour and we will soon be on the eve of the first of four fantastic major championships in 2022. 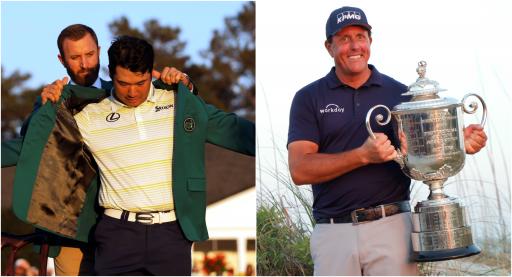 The PGA Tour is back in full swing and we have now seen our favourite golfers competing against each other in 2022. It won't be long until the first of four major championships is back.

We are only two months away from The Masters, which was sensationally won by Hideki Matsuyama last April. He became the first male Japanese golfer to win a major title.

On an attritional final day at Augusta National, Matsuyama finished one shot ahead of tournament debutant Will Zalatoris and three shots ahead of Jordan Spieth and Xander Schauffele.

The PGA Championship rolled around in May and Phil Mickelson made even more history at Kiawah Island. He became the sport's oldest ever major winner at the age of 50.

Mickelson battled with Brooks Koepka and Louis Oosthuizen on the longest course ever used at a mjor. It was the 45th win of his PGA Tour career.

Jon Rahm broke his major duck at the US Open last June. The Spaniard holed two incredible putts on the 17th and 18th holes at Torrey Pines to take the victory.

The Open Championship was the final major of the year and it was won by Collin Morikawa, who was making his professional debut at the event.

Morikawa played beyond his years at Royal St. George's, holing a number of important putts to hold off Jordan Spieth and Louis Oosthuizen to win the Claret Jug.

Here is the major championship schedule for 2022:

NEXT PAGE: BRYSON DECHAMBEAU REVEALS WHY HE'S DROPPED THE FLAT CAP ON THE PGA TOUR