Bryson DeChambeau appears to have ditched his iconic flat cap look on the PGA Tour in 2022. 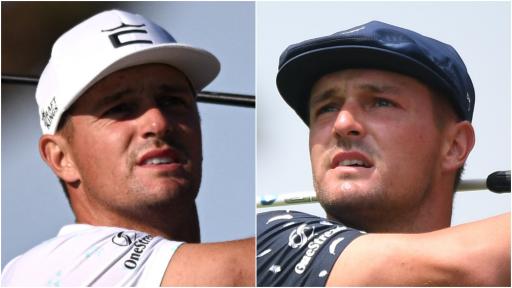 Bryson DeChambeau has seemingly ditched his flat cap on the PGA Tour as a result of taking his game to new heights in 2022.

DeChambeau, 28, has worn a Ben Hogan-inspired flat cap ever since bursting onto the PGA Tour scene in 2016 but as a result of bulking up and hitting bombs he has decided to make changes in his aeshetic.

Bryson's decision to drop the flat cap came during his off-season where he looked to build up even more clubhead speed.

DeChambeau, who finished in the top eight at the World Long Drive Championship in October 2021, has upped his average driver swing speed to over 132 mph, which is an increase of more than 12% since 2018.

As for now at least, baseball cap in, driver cap out.

"I wore the driver cap back in Hero [December 2021]," said DeChambeau.

"So the Sentry Tournament of Champions was just something a little different.

"I feel like I'm turning a bit of a page in my life, in my chapter and my book.

"As I've always said, I'm always evolving and changing and growing and adapting. It's just another one of those things. I don't know if it will be a thing to stay or it pops up randomly, sometimes randomly with the normal driver cap.

"It's going to be one that is just going to keep you guys on edge, I guess. It just depends on what I feel like and what I'm comfortable with that week."

It remains to be seen whether or not DeChambeau switches back into his driver cap, or flat cap as we like to call it, but as it has panned out so far on the PGA Tour this year he has worn a baseball cap each round.

DeChambeau is currently recovering from injury after withdrawing from last week's Saudi Invitational.

NEXT PAGE: BRYSON ON HIS LATEST INJURY - "I KNOW PEOPLE WON'T BELIEVE ME"