Phil Mickelson hits back at golf reporter following a low blow in his Tiger Woods question ahead of the Saudi International. 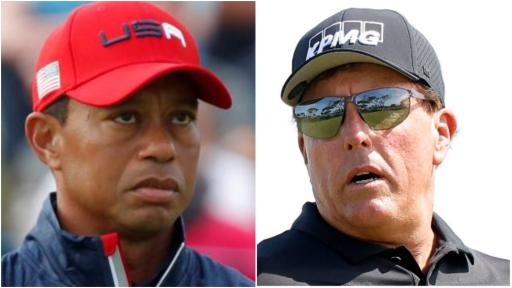 Phil Mickelson hit back at a golf reporter who fired a random shot when questioning him about Tiger Woods ahead of this week's Saudi International.

Mickelson, who is competing in this week's controversial Asian Tour event in Saudi Arabia, was quizzed by a golf journalist about it being the 25th anniversary of Tiger Woods' first win at The Masters this year.

While a fair question, it was the ending of his sentence that did not exactly sit well with golf's oldest major champion.

RELATED: PAIGE SPIRANAC ON BEING "MORTAL ENEMES" WITH PHIL MICKELSON

"It's the 25th anniversary of Tiger Woods' first win at The Masters this year... I just wondered if you had any abiding memories of that week, if you watched it when you went home after sadly missing the cut," said the golf reporter.

"Thank you for bringing it about that I missed the cut that week," replied Mickelson, who has only missed three cuts at The Masters in 29 appearances.

"I felt like that was a really critical part of the question."

To Mickelson's credit, he paused and then gave the reporter the answer he was not doubt looking for from the start.

"What I get out of that week as I remember and look back on Tiger's first win in the '97 Masters is how he shot 40 on the front nine and he turned it around and shot 30 on the back nine on Thursday.

"And I thought that the way he fought, hung in there after a terrible start with expectations on him to perform and to win and he opens up with a 40 on the front nine, he didn't back down, he didn't wilt, he came out and brought his best golf on the back nine and shot 30 to open with a 70 and ultimately won by 12 shots or so. It was one of the most impressive performances ever in the game of golf."

NEXT PAGE: TIGER WOODS MADE THIS OUTRAGEOUS PREDICTION AT A PGA TOUR EVENT - AND HE WAS BANG ON THE MONEY!