Harris English battled with Kramer Hickok in an incredible eight-hole playoff at TPC River Highlands, where neither play gave the other an inch. 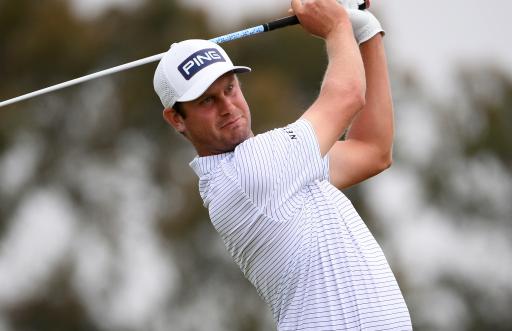 Harris English won the 2021 Travelers Championship after he came out on top in an incredible eight-hole playoff against Kramer Hickok at TPC River Highlands.

Both players finished on 13-under-par and took part in a playoff which now holds the record for the joint second-longest playoff in PGA Tour history.

English sank a superb birdie putt on the 18th green to finally take the victory, which gives him his second win of the season and the fourth PGA Tour title of his career.

"This was awesome, the fans were keeping us in it," said English.

"It's been awesome really all afternoon and hats off to Kramer, what a competitor. We were both grinding out there, making those six and seven-footers. We were trying our hardest, that was incredible and what an experience.

"The fans were awesome, they're always incredible in Hartford and I'm glad we got to give them a little show there"

English began the day on 8-under-par and two shots behind leaders Hickok and Bubba Watson and the 31-year-old made a solid start to his day with three birdies on his front nine.

English was 11-under-par with nine holes left, but Watson was in control again at TPC River Highlands on 13-under-par, going for his fourth win at the event.

Although the two-time Masters champion held a one-shot lead over Hickok at the turn, he completely imploded in his last five holes. Watson made four bogeys and a double-bogey to come home in 41 shots and finish in a tie for 19th place.

Although Hickok suffered a setback with a bogey on the 11th hole to fall back to 11-under-par, he replied with a birdie at the 13th hole to match the clubhouse lead of Australian Marc Leishman.

Leishman had surged up the leaderboard on Sunday with a superb 64 to set 12-under-par as he benchmark for the players still on the golf course.

English briefly took the lead on 13-under-par with two holes remaining and although he bogeyed the 17th hole, he bounced back with a fantastic long-putt birdie on his 72nd hole to set a 13-under-par lead.

Hickok responded superbly and replicated his playoff opponent English. Under extreme pressure, the World No. 331 also made a birdie on the final hole to force the playoff.

After they both made par on the first playoff hole, Hickok was inches from claiming victory on the second playoff, after his ball rolled around the lip on the 18th green.

Both competitors holed superb putts during the playoff in which they played the 17th and 18th holes multiple times each, but on the 18th green and final playoff hole, English rolled in a decisive birdie putt to seal victory in a memorable week in Connecticut.