Justin Rose is left speechless as he is named the 2021 Payne Stewart Award recipient presented by Southern Company. 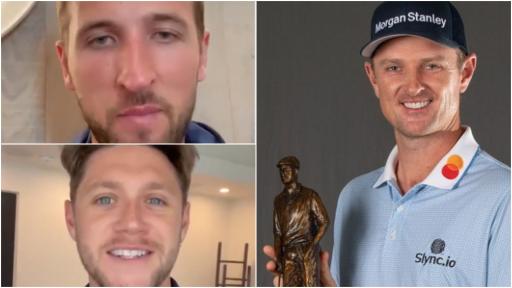 The annual Payne Stewart Award is presented by the PGA Tour to a professional golfer who best exemplifies the late Stewart's steadfast values of character, charity and sportsmanship.

TAP THE RIGHT ARROW ON THE POST BELOW TO SEE HOW JUSTIN ROSE REACTED TO RECEIVING THE AWARD!

Stewart, who tragically lost his life in an airplane accidnt 22 years ago during the week of the 1999 Tour Championship aged 42, won 11 times on the PGA Tour including three major championships (1989 US PGA, 1991 and 1999 US Open).

One year after Stewart's death, the PGA Tour created the Payne Stewart Award in his honour, and Southern Company has supported the annual presentation.

While a former US Open winner, Olympic gold medallist, 10-time PGA Tour winner and FedEx Cup champion, Rose, 41, does plenty of charitable work off the course with his wife Kate as part of their 'Kate and Justin Rose Foundation', a large part of which involves helping fight childhood hunger in Orlando.

So honoured to be nominated for the 2021 Payne Stewart Award presented by Southern Company! Thank you to the Stewart Family - Tracey, Chelsea, and Aaron - for this prestigious award. Payne did so much for the game, but also made a huge impact for so many outside of golf. pic.twitter.com/uaWA5MNe1r

Rose becomes the 24th recipient of the Payne Stewart Award, joining a distinguished group of respected golfers including Zach Johnson, who was recognised in 2020, and the inaugural recipients Byron Nelson, Jack Nicklaus and Arnold Palmer (2000).

"I am truly humbled and honored to be associated with the enduring legacy of Payne Stewart through this award," said a shocked Rose.

"The Payne Stewart Award has become an annual celebration of Payne’s impact on the PGA Tour and its players. I am forever grateful to be connected to a man who was the consummate professional on and off the golf course and will cherish being a Payne Stewart Award recipient well after my playing days are over."

Harry Kane, the current Spurs striker linked with a move to Man City at the moment, took to his social media to congratulate his good pal Rose.

"I just wanted to send my congratulations on winning the Payne Stewart Award," said Kane.

"Massive achievement and I'm extremely proud of you mate.

"But it's not just that, what you do outside of golf as well, whether it's building homes for children in the Bahamas or feeding kids in America. You're a credit to yourself and to your family."

Pop star sensation and Modest Golf owner Niall Horan also heaped praise on his good friend Rose, whom he regularly partners with at his 'Horan and Rose' event for charity.

"I just wanted to wish you a massive congratulations on being this year's recipient of the Payne Stewart Award," said Horan.

"As we know, Payne was a great man and his award is about to be passed on to another great man.

"Having partnered with you over the last few years on our Horan and Rose event, I've got to understand how much giving back means to you and what yourself and your wife Kate have done to raise money and help feed kids in America through your Foundation is unbelievable.

"I've been friends with you for a while, watching you win majors, Olympic gold and the FedEx Cup is incredible as a golf fan and friend, but to see you receive this award for your charitable efforts off the course just shows what a great man you are. Top guy and obviously a great talent."

Rose was born in Johannesburg in South Africa before moving over to Hampshire in England at the age of five. He met his wife Kate in 2000 when she worked at IMG and the couple have two kids, Leo and Charlotte.

The Kate and Justin Rose Foundation was set up in 2009, and they have worked with charities in South Africa, United States, the Bahamas and England.

"Justin Rose embodies everything the Payne Stewart Award represents," said PGA Tour Commissioner Jay Monahan. "Like Payne, he has been one of the premier players of his generation while using his platform to better the lives of those around him.

"The inspiring progress that he and Kate have made through their family’s foundation is a terrific representation of how Payne chose to focus his efforts away from the golf course, by giving back and treating people the right way."

NEXT PAGE: JUSTIN ROSE NEEDS A SOLID WEEK AT THE WYNDHAM CHAMPIONSHIP IN ORDER TO MAKE THE FEDEX CUP PLAYOFFS