"The hate for Bryson DeChambeau cuts deeper than distance"

In the latest episode of Tour Chat, we discuss why Bryson DeChambeau's quest for speed receives so much hate, plus you can WIN a Bushnell Tour V5 laser rangefinder! 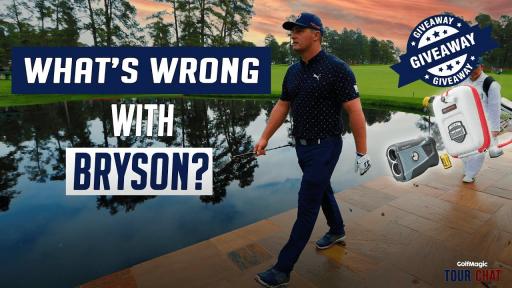 There's no denying that Bryson DeChambeau isn't everyone's cup of tea. He's a bit like marmite. You either love him or you hate him. The US Open champion has piled on the pounds and worked extremely hard on increasing his speed on the PGA Tour, but week after week, someone is tweeting how the 27-year-old is "ruining the game". Do people really think that DeChambeau's distance is a problem, or are people blinded by their dislike for the bloke?

It's time for another episode of Tour Chat and in this week's episode, Alex and Jack talk about Harris English's win at the Sentry Tournament of Champions, why Bryson DeChambeau's quest for speed and distance receives so much criticism, plus we will be telling you how you can get your hands on a Bushnell Tour V5 laser rangefinder worth almost £300!

The PGA Tour kicked off 2021 in style with a fantastic tournament in Hawaii that saw drama, controversy and some incredible golf.

English has been one of the most in-form players on the PGA Tour as of late and although he qualified for the Tournament of Champions in a slightly unconventional way, he made sure that next year he will play in the event as a true champion.

Joaquin Niemann looked like he was going to pinch the title at the final hole, but his missed putt forced a play-off against English and the American birdied the first extra hole for his third PGA Tour title and his first since 2013.

WHY DO PEOPLE HATE BRYSON DECHAMBEAU?

He might be leading the PGA Tour stats for driving distance, but let's not pretend that DeChambeau is hitting the ball 200-yards past everyone else.

Cameron Champ is an absolute beast from the tee and out-drove DeChambeau at last week's event and does so quite regularly on the PGA Tour, but do we see anyone tweeting how Champ is "ruining golf"? No, we don't. Because Champ does it naturally and hasn't yet reached the success level of DeChambeau.

Longest drives of the week @Sentry_TOC.

We think that the problem golf fans have with DeChambeau is not what he's doing on the course, but the process of it. Some fans are stuck in their ways thinking everyone should play like Seve did back in the day, but golf is changing and players are adapting.

What we're getting at, is we believe that Bryson rubs people up the wrong way from time to time, so some golf fans use this as a reason to attack him and tweet about him, when they don't really care about his quest for speed. So maybe, just maybe, people can stop acting like he's broken golf and just let him get on with it.

NEXT PAGE: Rick Shiels calls out YouTuber over his "personal attacks"