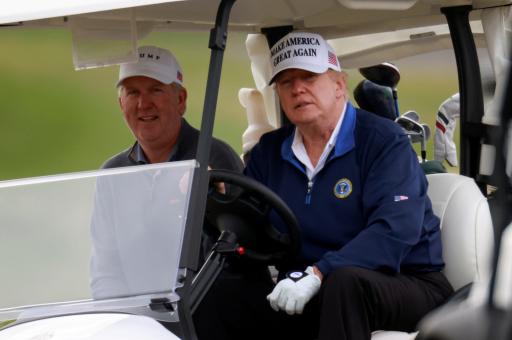 PGA Tour pro Grayson Murray has deleted his Twitter account just hours after posting a tweet telling Donald Trump to host his own tournament on the same week as the 2022 US PGA Championship - while putting up a "huge purse" to players in the process.

Murray's tweet came off the back of news that the PGA of America had voted to terminate the agreement of the 2022 US PGA Championship being staged at the Trump National course in Bedminster, as a result of the attack on the US Capitol by Trump supporters last week.

Look at a PGA golfer suggesting Trump do something in order to extort the @PGATOUR into offering a high purse. pic.twitter.com/KAMV9KfI7u

He tweeted: "Hey @POTUS, you should just host a tournament the same week as the 2022 PGA Championship at your course. Put up a huge purse that players can't turn down. Make the PGA Championship a weak field or force them to up their purse and cost them more money."

Murray's tweet was met with some scathing remarks, many of which targeted his own PGA Tour career and the fact he only has one title to his  name coming at the 2017 Barbasol Championship. The 27-year-old American currently ranks outside the top 200 in the FedEx Cup standings.

Even European Tour pro Eddie Pepperell has been getting involved, obviously:

There are no lows The Pepperell Invitational won’t stoop to. pic.twitter.com/BE1tQTJa3c

Here's a selection of other tweets following Murray's message to Trump:

"That's a great idea, but it doesn't go far enough. How about he starts his own tour to rival the PGA Tour? He can call it the Coup Cup Clan."

"It's a Major. It could have no purse and the top players would still choose it over any other that week."

"Would be your first time playing on the weekend during PGA Championship week in 5 years."

"You probably should have taken this tweet down about 10 minutes ago Grayson. The rest of us, however, are enjoying the replies."

"This would be amazing and I actually hope it happens. Let’s call it the Trump Casino Steaks Vodka Airlines University Championship."

Not only has the PGA of America terminated the agreement in place for Trump National to host the 2022 PGA Championship, but the R&A has also made it clear that Trump Turnberry will not be in the running to host the Open Championship anytime soon either.