"He handled it like a rock star": Justin Thomas praises rookie on moving day

Justin Thomas praised rookie Davis Riley after a stunning performance on moving day at the Valspar Championship on the PGA Tour. 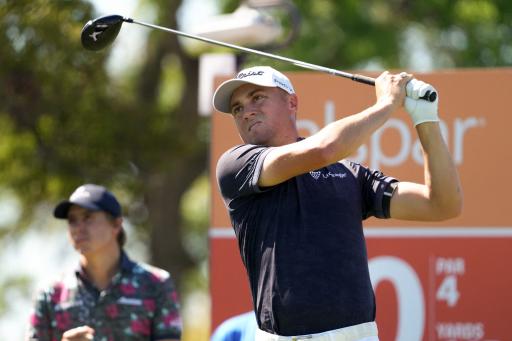 Justin Thomas paid tribute to Davis Riley after watching the youngster take the lead on moving day at the Valspar Championship on the PGA Tour.

More: Justin Thomas says Jon Rahm might be harder on himself than he is

Thomas, 28, carded his third successive round of 66 to force his way into contention for another win but it was Riley who stole the show.

Riley recorded his career low round on the circuit at Innisbrook with a sublime 9-under par 62. The course record at the track is 61.

He found four birdies on the front nine and notched five more coming in that included slam dunking one from the bunker at the par-4 ninth.

Now the 25-year-old will fight it out for his first career win on his 25th start. But he also has defending champion Sam Burns chasing him.

Thomas said of watching Riley: "Yeah, it was great. We've shared a lot of texts back and forth."

He added: "But I mean, it was really impressive. It's a big moment for a rookie and anybody, and he handled it like a rock star and made 9-under look very, very easy barring a crazy chip-in there on nine.

"But man, it was very impressive and that's always why I've taken a liking to him and thought the world of his game.

"It was.. [he] obviously had the crazy bunker shot on nine, but he made a lot of those mid-range putts that are kind of you can make or you can miss.

"And he made it seem like he should be making 'em. They were all going in. They were going in with great speed right in the middle. Very, very effortless, for sure."

Matthew NeSmith remains two behind. He followed up tying the course record on Friday with a 69.

Adam Hadwin is also in the top five, but likely is too far back. He made the par of the week at the 16th.

He sent his tee shot out way left and topped it (probably from a duff lie) about five feet. Then he stiffed it and tidied up for par.

Thomas said of his own game: "[I am] Just looking forward to have a chance to win another tournament. I'm playing really well. I feel good about things. I just need to go out and stay in my own little world and try and go execute.

"I feel like if I do that there's a good chance that it's going to have a chance come the last couple holes, but I can't control what those other guys do."

Next page: Watch Wesley Bryan make the cut in the most remarkable way