PGA Tour pro Wesley Bryan was playing his last event on a medical exemption at the Valspar Championship. Then he did this. 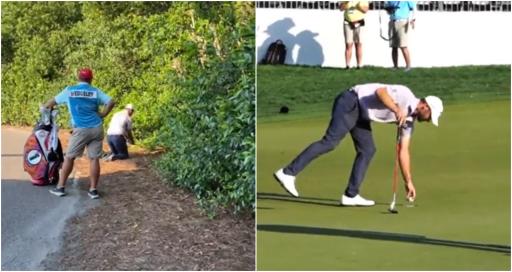 Bryan, 31, was playing in his final event on a medical exemption at the Valspar Championship at Innisbrook. With the cut line at 3-under, he was right on track to cruise into the weekend.

He knew as much. Bryan was well aware he needed to finish inside the top six to keep his full playing rights. While that may be a lofty goal, he can conditionally keep his playing rights by finishing 51st or better.

If you take a browse around golf channels on YouTube, you'll come across Bryan Bros. Wesley's older brother George (also a pro) documents their lives in golf.

Wesley Bryan is a bit of a character. George actually captured the moment on film when he injured his wrist. After one drive, Wesley fell to the ground in absolute agony.

Related: Wesley Bryan strips down to his pants at Honda Classic

He has filmed his return from injury and rehab. Wesley has struggled in recent events, missing cuts at The American Express, WM Phoenix Open and the Honda Classic.

Which leads us to our scene of the great escape. Bryan had played the back nine first at Innisbrook for his second round.

By the time he got to the eighth hole, everything was looking rosey. But he double-crossed his tee shot and ended up in a bush.

With his PGA Tour life on the line, he got to his knees and choked down on his iron. Eagle eyed viewers will have noticed WEDGELEY written on the back of his caddie's bib, such is his skill around the greens.

This week PGA Tour pros are allowed to have what they want written on the back of their carriers' bibs. Justin Thomas has his Twitter handle.

It was a par-3 so this made it all the more difficult. Bryan managed to slap the ball out from 34 yards. He pitched it to two feet and cleaned up a bogey.

Which leads us to the par-4 ninth hole with everything to play for. Bryan sent his tee shot down the left side of the fairway. Job number one done.

From there, he absolutely stiffed his approach to three feet and made the birdie.

Bring on the weekend.

Wanna know why he made the cut?? Hits this out, then gets up and down for bogey on his 17th!!!! pic.twitter.com/OGwQCMVL1V

Just for context this is @wesleybryangolf last start on his medical exemption and he birdied the last hole to make the cut on the number!! We still have hope!!!!!! Top 6 or better for full. Top 51 or better for conditional. pic.twitter.com/Pi8xKYpRbf