Justin Thomas on Jon Rahm: "He might be harder on himself than I am" 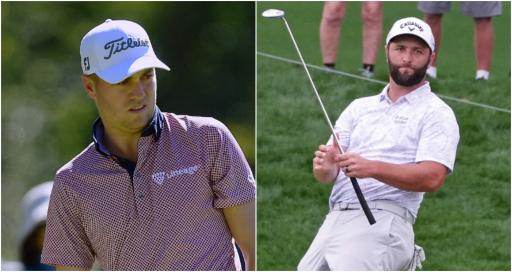 We're only three weeks away from The Masters but for Justin Thomas Augusta National is always on his mind.

Thomas, 28, freely admitted he was using some shots at The Players at TPC Sawgrass as practise for the types of shot he'll face in Georgia. Ball above his feet, ball below his feet. I could be facing this at 12.

The 2017 PGA Championship winner went 67-67 to force himself - yet again - into contention to pick up another win on the PGA Tour at the Valspar Championship.

Johnson had a pretty amusing answer to one reporter's question after his second round at Innisbrook. You don't have many stinker weeks, he was asked. "What's that?" came the reply.

What does he feel he needs to do to improve? His driving, so he can take advantage of that stellar short game. Though he said World No.1 Jon Rahm might be harder on himself than he is with his putting.

Thomas said: "I know my good putting days, my great putting days are really good, but it's just about maintaining those bad ones because I can win golf tournaments with stuff like that.

"So that's just where I've been trying to get it. And Jon [Rahm] is the same way I am. He might be harder on himself than I am on myself."

Thomas has a major itch that he wants to scratch in a few weeks' time at Augusta National.

Does he feel like there is something that he knows now that he wished he knew back then when he first played Augusta National?

Thomas said: "To be honest, not really. I mean, I feel like I did my homework really well and I played practice rounds with the right guys.

"I picked the right guys' brains. And to be honest, I feel like all of my finishes at Augusta are just due to poor execution.

"I feel very confident that I know how to get around that place and I know what pins, where to hit it, where to go off the tees, and how holes play with certain winds, etcetera, but I just, I've yet to catch a remotely hot putter that week and it just, it's just about making those putts or hitting those shots when you just quite need to and I think that's why I have a handful of 10th to 25ths instead of a couple wins."

The commercials for the tournament - typically - always begin early. TV viewers are greeted with the pristine images of the famous course, along with the tones of Jim Nantz.

Does that fire up Thomas just like golf writers and fans?

He added: "I'm very fired up. I have to talk myself down probably. There's so many, it's just unlike any tournament or any course.

"You have some second shots into par-5s where like this is, I feel like I'm going to be able to hit this into the second shot into 15 or potentially you hit a ball above your feet.

"You're like, okay, this is kind of good practice for a second shot on 13.

"So it's weird. There's no other golf tournament, no other golf course, that I do that on, but for some reason Augusta's just always on your mind."

Thomas revealed before he played his first Masters he took several trips beforehand to get a feel of the place so as not to be too overwhelmed.

But does his heart still skip a beat with that drive up to the clubhouse?

Thomas said: "Yeah. No, it is. There's nothing -- I think there's a handful of places in the world where you get really excited to take someone for the first time, and that drive is definitely one of them, when you're able to take 'em down Magnolia Lane."