Here's why Bryson DeChambeau was a "PAIN IN THE BUTT" in Ryder Cup GROUP CHAT! 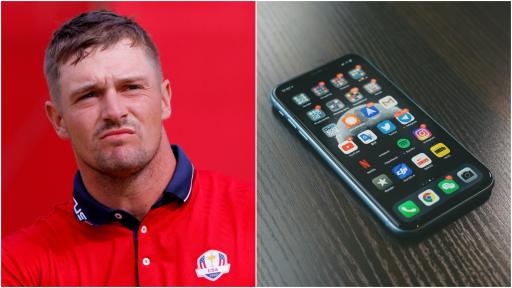 Bryson DeChambeau loves to be a little different so we probably should not be too surprised to learn he was the odd one out when it came to the official United States Ryder Cup Group Chat.

While there is nothing particularly wrong about owning an Android, the issue among Team USA's Ryder Cup side was that all members had an iPhone.

I mean, they could have solved their differences by using WhatsApp, but apparently they wanted to use iMessage - an instant messaging service developed for Apple products.

Perhaps under the orders of old boy Steve Stricker and his fellow vice-captain vets?

Bryson therefore turned out to be that annoying, green-text dude, according to Scottie Scheffler.

"Honestly, our group chat was a little bit of a pain in the butt because Bryson is the only one who does not have an iPhone," said Scheffler.

"I know that's really a shock that Bryson's the odd man out on that one. But we gave him some crap about that in the beginning of the week."

RELATED: TONY FINAU REVEALS HOW HE VERY NEARLY MISSED THE RYDER CUP AT THE LAST MINUTE!

DeChambeau and Scheffler teamed up superbly at the Ryder Cup, tying their Friday Fourballs match with Jon Rahm and Tyrrell Hatton, before going on to defeat Viktor Hovland and Tommy Fleetwood in the Saturday Fourballs 3&1.

They then both won their respective singles matches, with Scheffler comfortably beating World No.1 Rahm 4&3, and DeChambeau beating Sergio Garcia 3&2.

United States ran out a commanding 19-9 victory at Whistling Straits to mark an all-time record at the Ryder Cup.

NEXT PAGE: IS BROOKS KOEPKA FINALLY TURNING OUT TO BE BRYSON DECHAMBEAU'S BEST MATE? THIS COMMENT PROVES POSSIBLY!