"Bryson's style will change golf FOREVER": Brooks Koepka ahead of The Match 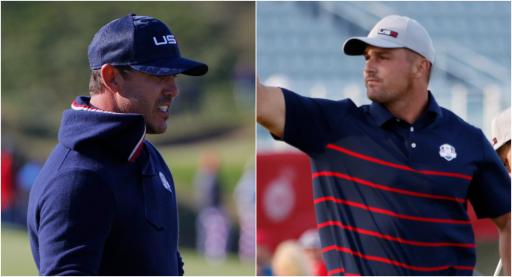 Brooks Koepka said that Bryson DeChambeau's style of play will "change the game of golf forever" ahead of the Shriners Hospitals for Children Open.

Koepka admitted to being impressed by DeChambeau's body transformation and his progress in the Professional Long Drivers Association World Championship.

DeChambeau's power and long-hitting style has taken him to US Open glory and eight PGA Tour wins. Whatever you think of him, DeChambeau set a goal and achieved it and he hasn't stopped yet.

Speaking ahead of the Shriners Hospitals for Children Open, Koepka also admitted it is tough to come up against players who hit the ball a long way.

"I think it’s going to change the game of golf forever. If you’re going to hit it that far and you find a couple of fairways, it’s tough to beat," said Koepka.

"It does get very difficult when you got wedge into the hole where guys got 6-iron. Your odds are going to be in your favour.

"That’s what he’s done. It’s impressive to be able to actually change a body, change the way you swing and yet still compete out here. I think that’s probably the most impressive thing.

"I don’t think anybody really thought he was going to get that far (in the PLDA competition), but the fact he did was quite impressive. So I think it’s one of those things you’re seeing with all these younger guys."

DeChambeau reached the final eight players in the competition, but he came up short and didn't make it into the last four. Kyle Berkshire went on to win the event.

Koepka's compliments are a sign that his public relationship with DeChambeau is improving and this was clear at the Ryder Cup when they hugged during the post-tournament media session.

And now they will be competing against each other in the fifth edition of The Match. It will be a 12-hole match and it will be played at The Wynn Golf Club on the Las Vegas Strip on November 26.

"I mean I think we’re excited. So it’s going to be good, you’ll see it, what, the day after Thanksgiving?" said Koepka about The Match.

It is fair to say that the four-time major winner wasn't exactly bursting with enthusiasm.

NEXT PAGE: BROOKS KOEPKA & BRYSON DECHAMBEAU: A TIMELINE OF THEIR "FROSTY" RELATIONSHIP