Tony Finau was convinced he had Covid-19 when he was taken ill a week before the Ryder Cup at Whistling Straits. 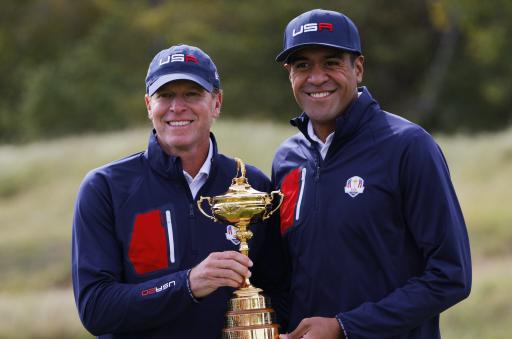 Tony Finau almost missed the Ryder Cup after he came down with a serious illness in the week before the event began.

The big American had pneumonia a week before the famous tournament and he feared he had Coronavirus, which he tested positive for a year ago.

He began coughing in a charity fundraiser hosted by Tiger Woods at Liberty National on the Monday before Ryder Cup week and this was when his concerns began.

"I started to kind of feel a little crummy. When we start to come down with something these days, what’s the first thing you think about? Covid," said Finau on his podcast, 'Let’s Get It'.

RELATED: "BRYSON'S STYLE WILL CHANGE GOLF FOREVER": BROOKS KOEPKA AHEAD OF THE MATCH

For the players at the Ryder Cup, the rules for Covid-19 testing was clear. They had to test negative three days prior to the event and once more on site.

Finau, 32, was ill five days before the first Friday of the Ryder Cup, so he flew home to Salt Lake City which sounded like hell on earth.

"I just balled up and threw my hoodie on and I had the chills the whole ride. I shivered for five straight hours. I had a fever. It was like the longest flight ever.

"I walked off the plane looking like I needed help, like a cane, or someone needed to push me in a wheelchair. It seemed like every bone in my body was aching."

Although he feared the worst, the two-time PGA Tour winner submitted all negative tests and he had never felt relief like it.

Making his second appearance at the Ryder Cup, he and Harris English beat Rory McIlroy and Shane Lowry 4&3 in the Friday fourballs.

This was the only point that Finau earned in Wisconsin, but it was a contribution towards the record 19-9 win and he was just grateful to be well enough to play.

"I was like, Hallelujah. I was just waiting to get a positive test. This is going to happen. There’s no way it’s not," Finau added.

"The only way I’m not playing in the Ryder Cup is if I had COVID. If I can barely walk, I’m playing. That’s how I roll."