"He's got a long road ahead": Rickie Fowler on Tiger Woods INJURY RECOVERY

Before Rickie Fowler fired 7-under-par in the first round of the 3M Open, he spoke about how his friend Tiger Woods was fairing with his injury rehabilitation. 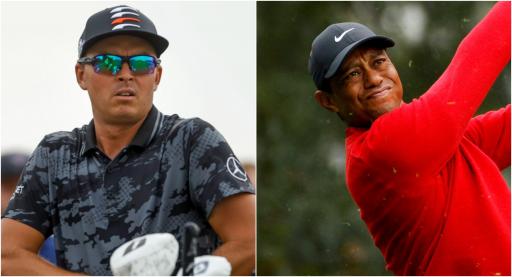 Rickie Fowler said that Tiger Woods has "a long road ahead of him" but "he is putting the work in" to get back to full fitness after his serious car accident.

The 15-time major champion suffered a severe car crash in February and required surgery, as he suffered open fractures and other injuries to his feet and legs.

Woods has provided fleeting updates on his health in the past few months on social media and Fowler revealed on Wednesday that he is working hard.

"I know he's been getting after it as far as rehab goes, that takes up most of his day," said Fowler

Any sort of development on Wood's current state of health is always welcomed by golf fans, players and experts and we can't wait to see him back to full fitness and hopefully, back on the golf course.

Since his words on the 45-year-old, Fowler raced into the first-round lead at the 3M Open, carding a round of 7-under-par at TPC Twin Cities on a day that was temporarily suspended due to lightning.

The five-time PGA Tour winner shared the lead after day one with Troy Merritt, Jhonattan Vegas and Roger Sloan, which is the first lead or co-lead Fowler has had in 550 days.

It would be great to see Fowler return to the winner's circle for the first time on the PGA Tour since 2019 and battle back into the top 100 in the world rankings.

The 32-year-old will begin his second round in Minnesota at 6.44 pm (BST), looking to build on his fast start on Thursday.

NEXT PAGE: RICKIE FOWLER HITS THE FRONT IN FIRST ROUND OF 3M OPEN ON PGA TOUR