Hideki Matsuyama admits he is still coming to terms with his hero welcome in Japan following his Masters victory. 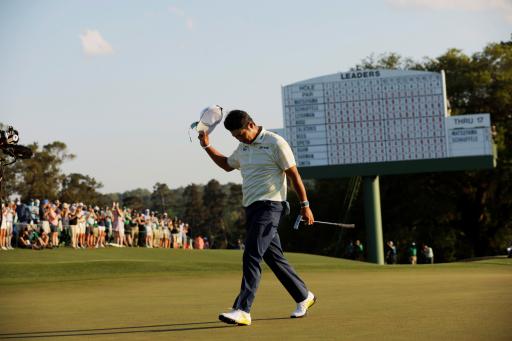 Hideki Matsuyama admitted he is still coming to terms with the added media attention in Japan following his historic victory at The Masters in April.

Back in action on the PGA Tour this week, Matsuyama said he felt "embarrassed, but grateful" for his hero welcome back in his home country after he became the first Japanese golfer to win a major and the first Asian-born golfer to win the iconic Masters Tournament.

Teeing it up at the AT&T Byron Nelson at TPC Craig Ranch this week, the 29-year-old reflected on his return to Japan after he claimed his maiden major title.

"Probably the one thing that stands out is I got back to Japan and I was quarantined for two weeks and I was able to probably read every news article and newspaper and magazine and TV," said Matsuyama, the first Japanese man to win a major.

"And seeing how the Masters win was portrayed in Japan was great, really unforgettable, and that really stands out for my trip back to Japan. It was a bit embarrassing. I'm not used to all that attention, but grateful that people took notice.

"I realise now the responsibility that goes with a major championship, especially the Masters. I'm honoured, I'm flattered by the added attention, but at the same time, sometimes it's difficult to say no.

"But it goes with the territory and, again, grateful that I have this opportunity and I'll try my best to prepare well for what's to come."

With the next major of the year - the PGA Championship at Kiawah Island - just around the corner, Matsuyama said he will be using this week to get back in the flow, having not played much golf back home in Japan.

"After you win a tournament and you make some adjustments and you go on, but this time going back to Japan and really not picking up a club much over there, I didn't get to practice very much at all," he added.

"And then coming back here, and I'm just, really one of my goals now is just to try to find my game again and prepare for the PGA Championship next week."

NEXT PAGE: Jordan Spieth reveals why he hasn't played on the PGA Tour since The Masters