Jack Whitehall makes "OUT OF ORDER" Tiger Woods dig at the BRIT Awards! 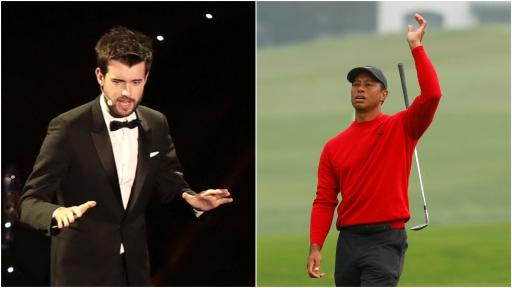 You might be asking yourself what does Tiger Woods have to do with the BRIT Awards? I mean after all, he's the world's greatest ever golfer and as far as we are aware, has yet to release any hit singles.

Brits presenter and comedian Jack Whitehall, however, could just not help himself when teeing up the very talented Olivia Rodrigo to sing her 'Driver's License' song during the annual popular music awards.

Let's just say his one-liner about Woods' recent car crash in Los Angeles very much divided opinion, with a number of people on Twitter claiming it was "borderline out of order".

Others thought it was very funny indeed.

Introducing Rodrigo onto the stage, Whitehall said: "In the words of Tiger Woods: driver's license, take it away..."

WATCH IT HERE - SKIP TO 1 MINUTE IN THE VIDEO:

Check out some of the tweets off the back of Whitehall's comment:

jack Whitehall was WRONGGGG for how he introduced Olivia Rodrigo. He said, “in the words of Tiger Woods- drivers license- take it away.” #BRITs

They did her so dirty with that tiger woods joke tho. No thnx

"In the words of Tiger Woods: driver's licence, take it away."

Many things have changed in the last year or so. Jack Whitehall being about as funny as a kick in the Jackson Pollocks is not one of them.

In the words of tiger woods...Drivers license take it away

In the words of Tiger Woods: Drivers licence, take it away! Too good Jack Whitehall #BRITs

The Tiger Woods joke was borderline out of order

Literally love @jackwhitehall
That Tiger Woods joke got me good. Nearly woke up the baby I choke laughed so loudly #brits2021

Okay maybe I’m just really drunk but “in the words of Tiger Woods - Drivers Licence, take it away” is the best joke I’ve ever heard love Jack Whitehall #brits2021

@jackwhitehall THAT TIGER WOODS JOKE WAS TOO FAR

Woods is currently recovering from multiple leg injuries at home, although his future career on the PGA Tour is somewhat now in jeopardy given the extent of his injuries.

The 15-time major champion has received a number of visits from his peers, including Rory McIlroy, Justin Thomas and most recently, Rickie Fowler, who gave an update on Woods' condition.

RELATED: TIGER WOODS PICTURED FOR THE FIRST TIME AFTER HIS HORROR CAR CRASH