Masters champion Hideki Matsuyama ruled out of The Players Championship on the PGA Tour, and fantasy players are not best pleased at the timing of the news. 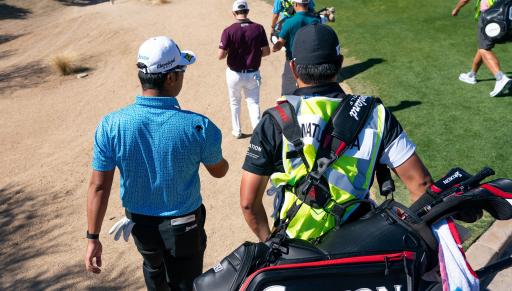 Hideki Matsuyama has been forced to withdraw from this week's Players Championship on the PGA Tour due to a back injury.

Matsuyama was considered one of the favourites for the PGA Tour's flagship event of the season this week but he will now be replaced in the field by Patrick Rodgers.

PGA Tour confirmed the news while the opening groups were teeing off their first round, much to the disgust of a number of DFS Fantasy players who were no longer able to change their lineups as the tournament had started.

Hideki Matsuyama has withdrawn from The Players due to a back injury he will be replaced in the field by Patrick Rodgers #PGATOUR pic.twitter.com/oI0YQI4N6d

The American will now join up with Joaquin Niemann and Cameron Smith for round one and round two at famed TPC Sawgrass.

Rodgers is ranked 233rd in the world but remains winless on the PGA Tour.

His only victory to date came on the Korn Ferry Tour back in 2015.

Matsuyama had been in solid form heading into this week, especially having won the Sony Open at the start of the year followed by a top-10 finish at the WM Phoenix Open last month.

The Players Championship has proven to be a frustrating event for Matsuyama, not only because of today's injury but also because he tied the course record at Sawgrass in round one of the 2020 tournament only for it to be cancelled due to the start of the Covid pandemic.

It's fair to say a number of fantasy PGA Tour players were not best pleased with the timing of the announcement of Hideki's WD as it meant it was too late for them to change their lineups with the tournament having started.

There had even been an hour delay to the start of round one due to inclement weather.

Play got underway at 7.45am local time, and the announcement of Matsuyama's withdrawal came just after 8am.

When you have Hideki in your DFS line up and he withdrawals after tourney starts pic.twitter.com/NcT1l6009P

Why was this held until 8:03 AM when they have been hitting balls since 6:30 & pushed tee times back 1 hour? This is horrible by the PGA

Thanks for tweeting this after the damn tournament started. Wtf! Lineups ruined

@DraftKings Hideki Matsuyama WD’s at 6 am and players can’t edit their lineup?! There’s literally four players on the course and they’ve finished one hole! SMDH there goes my $100…

Hey @DraftKings Hideki Matsuyama just WD from the players tournament. Only 6 guys on the course and I cannot change my team. This is absurd. Consider rule changes please.