Davis Love III didn't even notice Tiger Woods was standing behind him at his Hall of Fame induction ceremony. 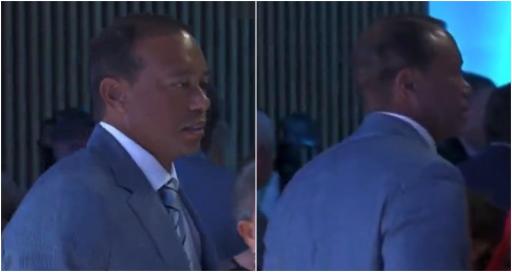 Tiger Woods was officially inducted into the World Golf Hall of Fame at PGA Tour headquarters.

A tearful Woods, 46, was introduced to the crowd by his 14-year-old daughter Sam Woods in a moving speech.

She told the world she had already inducted her father into the "dad hall of fame" many years ago.

But she added that he was a "fighter" who "always defied the odds" after the "ultimate low" of his car crash in February.

"About a year ago you were stuck in a hospital bed, at one of your ultimate lows," she said.

"At one of the scariest moments of your life and ours. We didn't know if you would come home with two legs or not.

"Now, not only are you going to be inducted into the Hall of Fame, but you standing here on your own two feet.

"This is why you deserve this. Because you are a fighter," she said.

Tune into @golfchannel for Tiger Woods Induction into the #GolfHOF pic.twitter.com/f17LadXzYf

Woods was scheduled to speak for approximately 10 minutes. Instead, he spoke for 17 minutes without a script.

In his speech, he paid tribute to his parents for their love and support and the people who have contributed to his career.

In his junior golf days when he was denied entry into clubhouses because of the colour of his skin, he would ask two questions.

Those questions would be "What is the course record?" and "Where is the first tee?"

After the ceremony he cheekily gave former Ryder Cup captain Davis Love III a cheeky pat on the bum.

The only problem was, he didn't notice:

Imagine Tiger Woods smacking your ass after he was inducted into the hall of fame .... and you didn't notice?!?! pic.twitter.com/HcZfcDsrx8

More: Hideki Matsuyama forced out of The Players