Hideki Matsuyama shot a bogey-free score of 66 at TPC Craig Ranch on Friday which included a miracle birdie on the 11th hole. 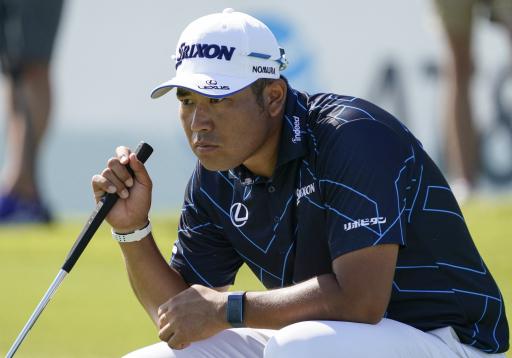 Hideki Matsuyama hit one of the shots of the week in the second round of the AT&T Byron Nelson at TPC Craig Ranch on his way to a superb round of 6-under-par.

Matsuyama didn't make a bogey on Friday in Texas, but he was made to sweat on the 11th hole when he hit his tee shot right of the fairway and in the trees.

The former Masters champion had a juicy lie in the rough and his flight path was hindered by a number of low-hanging trees and large branches.

With a short follow-through and a punchy swing, Matsuyama arrowed his ball below the natural obstructions and it went bounding on towards the hole.

What a recovery from Hideki pic.twitter.com/v63NDu8C48

The ball didn't stop. Matsuyama watched on as it rolled on to the green. His ball eventually stopped about six feet from the pin much to the shock of the crowd and the commentary team.

This was the Japanese superstar's fifth birdie of the day. He added another one on the 12th hole to card a 66 to move to 11-under-par for the tournament.

The 30-year-old is currently ranked fifth in the FedEx Cup standings and is having a great season. Having won the ZOZO Championship and the Sony Open, Matsuyama is one of only five multiple-winners on the tour in 2022.

Matsuyama is sat in tied ninth, four shots behind Ryan Palmer, David Skinns and Sebastian Munoz on 15-under-par. Jordan Spieth is one shot better than Matsuyama on 12-under-par.

It has been a low-scoring week at TPC Craig Ranch with the cutline being set at 5-under-par. Players such as Sam Burns, Will Zalatoris and Kevin Kisner haven't made it to the weekend.